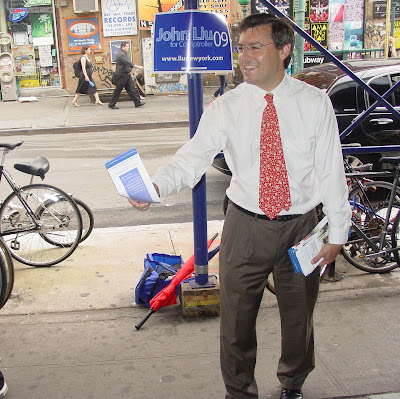 It's a big day for David. Fresh of repenting his sins at shul, he's on the street, shaking hands, putting signs on telephone polls, sticking stickers to windshields that are surprisingly hard to remove (we know, we have photos)... all for the big showdown tonight at 9 PM with John Liu. 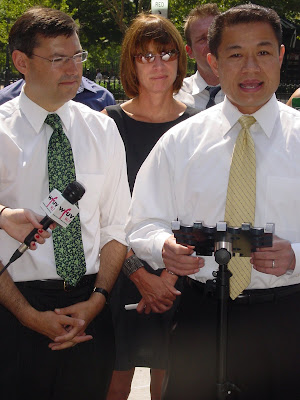 Now, after a searing article in The Village Voice, a brief meeting with a divine angel, and turnout running at abysmally low levels, just who is going to blink first? 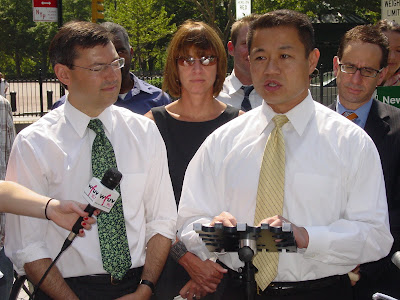 Well, ok, that's not the best indicator for what will happen tonight. It's all about turnout and who has the most energized voters. On Avenue B there were John Liu posters everywhere, while Yasskyites blanketed Park Slope and Brooklyn Heights with their placards and literature. The frame of the race to me comes down to a character from Star Trek: who can be the most Spocklike. And it's true, Comptroller Billy Thompson is a huge Star Trek fan, so I'm not far off here. Captain James T Kirk, he's the mayor. He's in charge, blustery shouting orders. Spock, on the other hand, is the highly logical counterweight. That's the comptroller in a nutshell. So has David Yassky or John Liu positioned themselves as the most boring choice, outpacing the relatively spunky David Weprin and the shows-signs-of-a-faint-pulse Melinda Katz? We will know soon. As Spock would say, "It is curious how often you humans manage to obtain that which you do not want."
Posted by Aaron Short at 3:47 PM

Great coffee beans really make wonderful coffee. you will definitely like this.