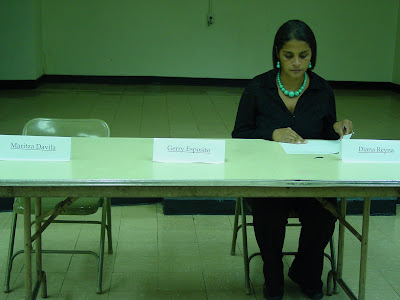 If a debate happens in Brooklyn and only one candidate shows up... does it count as news?

Yes it does. Nine (9!) newspapers showed up last night expecting a 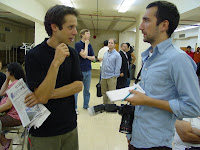 debate between Diana Reyna, Maritza Davila, and Gerry Esposito, who are all running for City Council in the 34th District. This includes The Daily News, New York Observer, Broooklyn Paper, WG News and Arts, Brooklyn Downtown Star, Greenline, The Courier, and El Diario (English version here). Diana, the incumbent councilmember, was the only candidate who made it out. As Ben Muessig of the Brooklyn Paper said, "It was Diana's debate to lose." 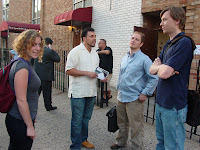 That's right. Brooklyn reporters are taking the debate to the streets.

It's been a bit like musical chairs, as Isaac Abraham said, trying to get all three candidates in the same room. The only time it's happened was at the Brooklyn News 12 debate, at which somehow, shockingly, everyone showed up. It's being televised tonight, and I'll embed the video once I figure out how to do that. Meanwhile, the list of canceled debates and candidates forums stretches on like bits of rusted muflers and rims laying on the shoulder of the BQE.
Make the Road New York's forum: canceled (Diana said she would come, Maritza and Gerry did not confirm). CNG/Brooklyn Paper debate: postponed, postponed again, then canceled (Gerry committed, and actually showed up to the office thinking the debate was on, but Diana canceled and committed after the debate was officially canceled. Maritza was noncommital throughout). WG News&Arts: Gerry is confirmed, but Diana hasn't discussed it with her staff yet and Maritza didn't even know about it until yesterday. 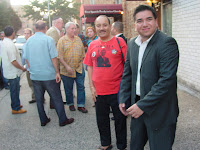 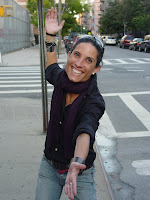 Credit Churches United for Fair Housing's Rob Solano, above, and El Diario's Carmen Alacron, left, for sticking with their event, which went on despite the absences. I was scheduled to keep time, but it's hard to keep time when there's only one candidate talking. I guess I could have cut Diana off, but she kept repeating and retranslating everything in English and Spanish for the bilingual crowd. As another reporter said, thirty percent of what she said in Spanish was interesting. I wish I spoke Spanish.

"I can continue to go on and on, but I don't want to dominate the conversation-one way," said Diana. 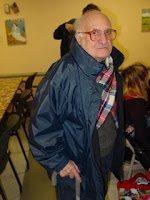 So what do we call a debate with only one candidate? A rebate? Probate? I know! An Abate! Like Vinny Abate! Unfortunately, the former Community Board 1 Chairman, a Gerry Esposito supporter was not in attendance either. Neither was Vito Lopez, but here's how he feels about the race:

In terms of what Diana actually talked about, a Los Sures board member asked about mayoral control, Marty Needelman asked about the Broadway Triangle, and Juan Ramos asked about gang violence. Apparently her answers were better in Spanish. I retrieved bits and pieces, and will link it up when it posts. Diana couldn't stay very long, as her car had been towed after visiting Bushwick Hylan houses earlier in the day.
"I would love to stay but I have half an hour to get there," said Diana. 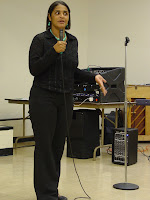 On the way out, several reporters caught Diana, trying to get her to dish on her opponents for not attending. Both Maritza and Gerry had prior engagements that conflicted with this debate and also their advisors expressed that their candidates were better served canvassing in the district than attending what they believed was an event that included a large pro-Diana crowd. We didn't poll the crowd, but I would say that the audience leaned Diana. As a commenter below noted, Los Sures has been canvassing for Diana, Marty is supporting her, as are many of the other community leaders in the room.
"This is unacceptable behavior. Our community deserves leadership, not cowardice," said Diana.
Solano thinks word-of-mouth will spread to some more neutral voters in the community about the absences. There's only two weeks left.
"Best Debate Ever," said Ben, afterward.

P.S. Juliet said that her favorite line from Diana on crime prevention was "I want to make sure we extend a positive olive branch instead of a negative one." Classic.

Did she talk about her role in the City Council slush fund scandal?

"a Los Sures board member asked about mayoral control, Marty Needelman asked about the Broadway Triangle, and Juan Ramos asked about gang violence."

Hmmm... lets think about this... This was a diana love-fest

give me a break, aaron. I though you knew better than this.

Its so disappointing to be sitting down to talk about issues at this point when there are two weeks left. Everyone knows that Diana believed that it was the best thing FOR HER INTEREST to run another term. Its time for a change in the community.

Well...if it was so easy to attack Diana Reyna liked mentioned by "anonymous at 9:04pm"...why wouldn't the other candidates show up and go on the attack..Why dodge an event co-sponsored by newspapers and filled with local residents..ohh I see the room is Diana' supporters..please, come on like Gerry and Maritza couldn't bring there supporters?? Actually, I think the reality has become if you seen the tv debate, is that Gerry looks very nervous and Maritza looks lost and scripted. Not to say that Diana is been great tv but imagine being the two that are worse then her....lol..and trying to prove to everyone to vote for you, not happening at the 34th..

darn, I was hoping to see Gerry give an opinion in public and Maritza speak for herself. Guess I'll have to wait on that.

Seems like Maritza and Steve Levin have taken the same anti-debate appearance medication.

Shouldn't it be, keeping it anonymous?

News 12 Debate, 34th councilmanic district (or as one of the candidates seems to phrase it: "councilmatic").