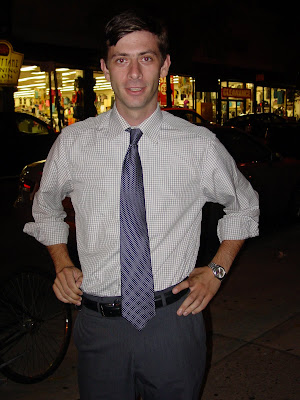 Democratic Nominee Steve Levin, above, plays the bass guitar. Not the drums, as previously reported. He was also never actually in MGMT, but played with the dudes who eventually formed MGMT. Major major mix-up here and I regret the error. He also did not play in Spinal Tap, below, but if he did, he would have played double bass.

Now that he's the Democratic Nominee... is there time to get the band back together? Or start a new band with Queens County party leader Congressman Joe Crowley?

Steve Levin
Democratic Council nominee
Age: 28
When asked how he was able to muscle out a bunch of challengers in a competitive Council race to fill David Yassky’s Council seat, Steve Levin gives one answer.
“My friend and mentor Vito Lopez,” he says. “I would not have been elected if it were not for him.”
Indeed, the former chief-of-staff for the Assembly Housing chair and Brooklyn Democratic leader says that his old boss has given him lots of advice over the years, but that he led more by example.
“He is a tireless worker and he always does everything he can for the people he represents,” Levin said. “It comes from the heart.”
But when the Brown University graduate was deciding whether or not to make a run for the Council, he did not only get heart-to-hearts from local political big wigs. His father’s first cousins, Michigan Senator Carl Levin and his brother, Rep. Sandy Levin, weighed in as well.
“They both encouraged me to go for it,” he said. “They said work hard, be true to yourself, and always try to do the right thing.”
But, he added, the real motivation came from within.
“I’ve always wanted to serve people and to make people’s lives better,” he said. “That’s been the goal all along.”
How did your past jobs get you to where you are today? My past jobs were as a community organizer and chief of staff to Vito Lopez, and there has always been a commitment to serving people and serving their needs.
If you were not working in politics, what would you be doing: Public interest law
Five years from now, what will it say on your business card: Councilmember for the 33rd district
Who would play you in the movie? Harry Connick, Jr.
Posted by Aaron Short at 12:12 PM