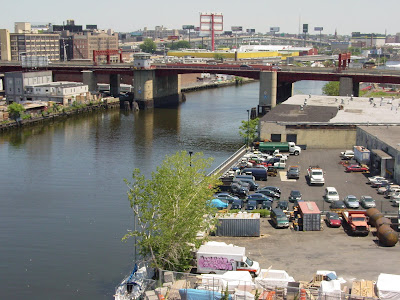 From the EPA...
New York, NY—Sept. 23, 2009) – The U.S. Environmental Protection Agency (EPA) is proposing to add New York City’s Newtown Creek to its National Priorities List (NPL) of sites with known or threatened releases of hazardous substances, pollutants, or contaminants throughout the United States and its territories. The NPL is EPA’s list of sites that warrant further investigation and longterm cleanup; the listing will allow EPA to build on the extensive sampling of the creek that has already been done.
“Newtown Creek is one of the most grossly-contaminated waterways in the country,” said Acting Regional Administrator George Pavlou. “By listing the creek, EPA can focus on doing the extensive sampling needed to figure out the best way to address the contamination and see the work through.”
EPA responded to requests by members of Congress to evaluate specific sites along the creek by publishing a September 2007 report that contained a review of past work and recommendations regarding future work at Newtown Creek. The state of New York referred the site to EPA due to the complex nature of the contamination along the creek.
This raises a lot of questions including what will happen with the sludge boats. Read my updated story about this here. Tracking...
Posted by Aaron Short at 3:36 PM