City Planning Commission member Angela Battaglia has come under criticism from Broadway Triangle opponents for her role advocating for the site's rezoning.
As the proposed rezoning of the Broadway Triangle makes its way through the city’s land use review process, one member of the City Planning Commission, Angela Battaglia, has played a significant but largely behind-the-scenes role in the project’s advancement, making opponents of the plan uncomfortable.
Battaglia, appointed by former Mayor Rudolph Giuliani in 1996 and 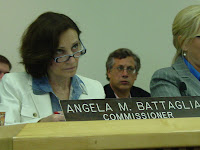 reappointed by Mayor Michael Bloomberg in 2003, is the Housing Director of the Ridgewood Bushwick Senior Citizens Council (RBSCC), one of two organizations that received sole-source control of the 31-acre South Williamsburg site.The rezoning plan is currently under review by the City Planning Commission, which will hold its public deliberations on September 9 in Manhattan.

On September 2, Marty Needelman, an attorney with Brooklyn Legal Services representing the Broadway Triangle Community Coalition, sent a letter to City Planning Commission Chair Amanda Burden and Department of Investigation Commissioner Rose Gill Hearn, calling on them to investigate whether Battaglia has discussed the proposed rezoning with other members of the Commission.The City Planning Commission is scheduled to hold a hearing on the Broaday Triangle rezoning. “My clients believe that she’s likely to have spoken to board members about the project, likely, in light of her relationship to Ridgewood Bushwick,” said Needelman, who was also contemplating further legal action.

A spokesperson for the Department of City Planning said that Battaglia has recused herself from the Broadway Triangle rezoning proposal and would not participate in those deliberations.Battaglia did not return calls for comment in her Ridgewood Bushwick housing office, and a representative from RBSCC said that she was currently on leave from work.Over the past 25 years, Battaglia has compiled a distinguished career working to ensure affordable housing and senior services in Bushwick and Ridgewood, Queens. 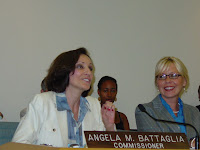 In 1982, Battaglia became Executive Director of the Housing Office of RBSCC, where she oversees more than $25 million in public and private program funds.Battaglia played an active role in early planning meetings with the city’s Department of Housing regarding the future of the Broadway Triangle.According to Councilmember Diana Reyna (D-Williamsburg), who opposes the plan, Battaglia was present as a Ridgewood Bushwick representative during the first charette, from which many of the organizations sending the letter to Burden and Hearn were excluded. One of those organization leaders, Rob Solano, of Churches United for Fair Housing, believes Battaglia is continuing to play a role in the rezoning process.“How can you not affect the decisions of the Planning Commission and be on Ridgewood Bushwick’s payroll at the same time?” said Solano.