Pregaming with the City Planning Commission 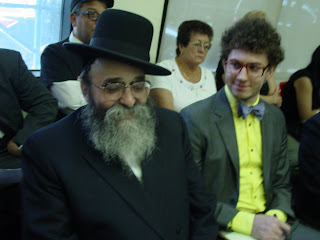 I was going to give "City Planning: Best Dressed" to Matt Chaban, right, but Rabbi David Niederman, left, showed everyone how it's done.

Before we get to Community Board One's September meeting and Running Diary, I wanted to back it up and recognize the two ragers this morning that were the City Planning Commission's hearing regarding the Broadway Triangle (and the TransGas Energy 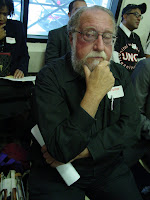 Appellate Court hearing, where everyone else was). The hearing room at 22 Reade Street was packed at 9:30 AM and it was a veritable who's who of Williamsburg. Everyone who is anyone signed up to speak. Councilmember Diana Reyna, Rabbi David Niederman, Leonides Reyes, Maria Viera, Ron Shiffman, Emily Kurtz, Esteban Duran, Maggie Grady, Juan Ramos, Simon Weiser, Ernie Wong, Rosa Espinoff, Will Harris, Will Florentino, Tim Roberts, Anita Durbin, and the dude from Sha Na Na, you know, the lead singer. I think his name was Danny York. No, Donny York. Anyway, as York says,
"Rock 'n roll has nothing to do with a generation gap anymore. Today, it's really a generation bridge." 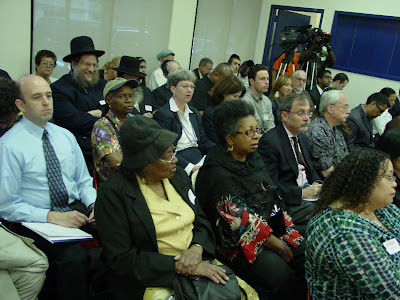 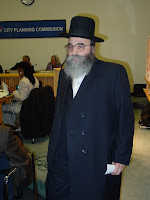 The hearing lasted about two hours, with the Commission alternating between five speakers for and five speakers against the plan. I'll have the wrap of who said what in The Short List later this week, though the main arguments from the opponents of the plan were that Community Board 3 members were excluded from the Broadway Triangle negotiations and that industrial businesses located within the Triangle may be forced to move or close if the city seizes their property through eminent domain. Proponents of the plan argued that a diverse group of community interests were involved with the planning process and that the need for affordable housing in North Brooklyn was too pressing to delay the plan just because some groups felt left out of the process. 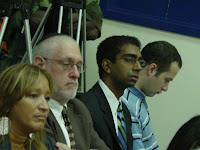 People who didn't speak? Marty Needelman. He was sitting near the back of the room next to Los Sures' Deborah Medina, looking like a cat that swallowed a small bird, with a briefcase filled with several copies of a 30-page lawsuit he planned to file against Mayor Mike and Department Housing and Preservation Development (HPD) later that afternoon. I wonder what he's thinking right now...


By the way, I have to recognize Amanda Burden and Kenneth J. Knuckles of the City Planning 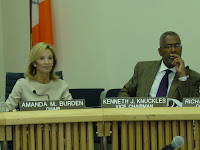 Commission who owned the room today. Very few people went over their time limit, the meeting was orderly, and everyone brought their respect. I want to use this opportunity to welcome Kenneth "Brass" Knuckles to the Jack Hammer Great Names All Stars. Knuckles owned the room today. He's a first-ballot inductee in the class of 2009, along with Rami Metal, who made second ballot. Fortunately, Jack Hammer himself was on hand to welcome him into the Hall. Congratulations Mr. Knuckles! 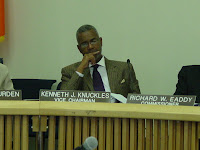 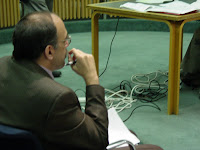 Thanks for including the photos. What's always critical when covering Planning Commission meetings is to include a comment Amanda Burden;s fashion statemnet. You summed up the command aspect of her work, but I think the outfit tastefully shows who's the boss with that key touch of both feminity and minmalist aestheic, just the right way to offset the muckiness of the hearing content.

sorry to inform you Mr. Short, but, while you were so busy drooling over Ms.Diana Reyna, Marty Needleman DID speak...How could you have missed it? He was the one stuttering something about the Jews taking up appx 75% of the units from public housing from Broadway to the Navy Yard.

I had to race down to get the TransGas appellate hearing in downtown Brooklyn. Extremely busy day. And I was not drooling over Diana Reyna. I have a glandular problem and Diana happened to be standing next to me.