Jerry's excited about the return of CB1 to the Fall calendar. Are you?
6:50 PM I'm running late this evening (six stories in 36 hours) but fortunately my former colleague, Greg Hanlon, has been taking notes and the Greenpoint Gazette's Juliet Linderman has saved a seat at Press Row. "You missed nothing," texts Hanlon. Chairman Chris Olechowski took roll just as I was getting in the door, and there had been some questino as whether enough members were present to conduct business, but the count is 26, so they just made quorum.
I spot Greenmarket's Jessica Douglas, who is expecting the board to approve the move of the McCarren Market from the northern edge of McCarren Park to the southern edge. The Parks Committee approved the motion last week and this looks pretty non-controversial. Should be a quick meeting, right? Another reporter shakes his head. 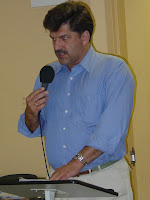 6:56 PM: CB1 mascot and Chair runner-up Miezsko Kalita takes the dais to speak about reviewing the committee structure. Did you know Mieszko can kill a man just by staring at him? He was trained by the Polish KGB. Linderman doubts this. "He's the sweetest man in the world," she says. "He's awesome."
Anytime you hear the words "reviewing committee structure" add 45 minutes to whatever you're doing and try to find a snack. Mieszko explains the new sign-in sheet for committees and Chairman Chris chides board members for speaking on the record or representing the board in the media.
“We’re all volunteers here and we work hard. Making frivolous accusations without evidence should not be tolerated,” says Chairman Chris. 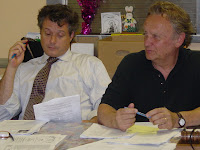 7:01 PM: Chairman Chris tries to explain the Kent Avenue bike plan, constructed by the Department of Transportation, the history of the Brooklyn Greenway, and the consequences of the Greenway.
"I don’t even know what’s going on there right now," says Chairman Chris.
"Nobody does," says Linderman.
What is Ward Dennis doing right now? Is he doodling? Breaking news: We’ve obtained an unofficial rendering of the blueprints Ward is doodling. 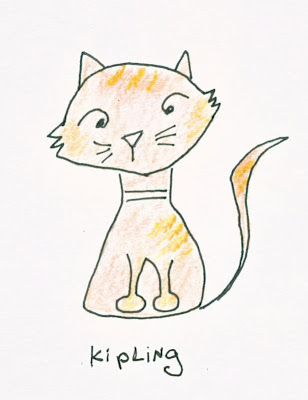 7:12 PM Linderman announces she is leaving to go back to the office. Press Row is wondering 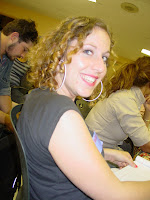 why all these young people here? Nobody knows who they are. Maybe they're here to support this liquor license. "Fresh Meat" says Linderman.
Linderman starts playing cards with OSA's Julia Morrow, while I talk with one of the young people I didn't recognize. I was right. She was there supporting Custom Wine Bar.
"It will minimize the illegal activities of others. Wine is not the same as malt liquor or everclear shots. Everyone drinks wine," said the woman.
I think Morrow just schooled Linderman in another round of Gin. She's leaving for good now.

7:25:15 seconds: We're onto Committee reports. Rami "Sheet" Metal arrives and sits next to OSA assistant Julia "Will You Still Love Me To" Morrow. I see Rami more often than his own mother.
Mieszko gives his ad hoc report and goes back to the dais to announce 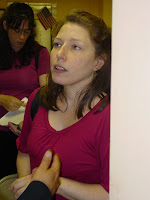 changes in the commitee structure. He's an early contender for CB1 meeting MVP. It could be a close race tonight. Miezko talks about some the lesser known committees, and this brings up an interesting point. If CB1 committees are like high school, Land Use is the Varsity Football team, the Executive Committee is the Student Government, Public Safety is the foreign exchange student, Transportation is the Debate Team that everyone openly resents but secretly admires, and the Environment Committee is the group that gathers in Evan Thies' basement after school and talks about Star Wars. Parks are the stoners.
Some Mieszkoisms about the committees:
"Newtown Creek is an active waterway. Bridges are still open and ships are still going under it."
"We are really interested in Woodhull Hospital and how they're serving the community."
"Many of you have noticed that motion picture companies love... LOVE...to block five block stretches of Manhattan avenue. I can't say it's bad for the community but it brings unrest."
Quick vote. Motion carries, but Miezsko adds a coda.
"Attendance at the committee meetings is virtually nonexistent. If you look at public safety attendance sheet at the end of a meeting, the only person who signs in is me. And there are 12 people on my committee."
CB1 member Michael Chirichella asks for clarity about the committee attendance policy. I'm slightly afraid of Michael Chirichella. He's an old-school Williamsburg resident, a UPS driver and a "good guy", according to Gazette Publisher Jeff Mann (who just arrived). I'm still afraid of him.
7:47 PM: Suddenly an older member of the audience interrupts the meeting, spekaing in fractured English with an Italian accent.
"This is turning into patricians of ancient rome!" he continues...
I'm sorry, you're out of order. This section is for community board members only"
I notice the bearded guy who got the Chair's attention. His name is Ethan Herschenfeld. Thanks for getting the Chair's attention, Ethan. 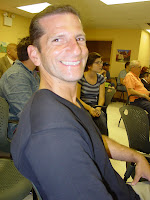 "My pleasure. I'm be pointing to other insane people as the meeting goes on."

7:53 PM: There's more bickering about 1/4 points, 1/2 point deductions for attendance, and when does attendance count if a committee member is late for a board meeting.
"It should be before the top of the 5th inning, before it becomes an official game," says Jeff.

8:01 PM: Hanlon skips out and we catch up in the hallway. Just after we step outside, a tired couple leaves the meeting. "Why don't they do the public meeting first before 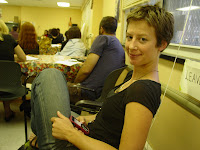 they handle their private business? They're just trying to wear us down," says the wife.
Inside, we have a voice vote for the move of the McCarren Greenmarket form Nassau and Lorimer to Driggs and North 12th. A-pproved. Wow, that was fast.
Michael Hurwitz and Jessica Douglas leave the building. Good luck with the move, guys!

8:03 PM: Now we're onto the Custom Wine Bar. The owners of the bar speak, defending their investment, while residents in the surrounding area parade up and state why they don't want another bar on top of the 26 that are already around Metropolitan. It's a quiet stretch now, but the Knitting Factory opened tonight, and residents are skittish that Custom will keep people in the neighborhood longer and later and keep them awake. Also, they don't like urination. It's hard to argue for urination. Jeff Mann is thinking about how to craft that argument. 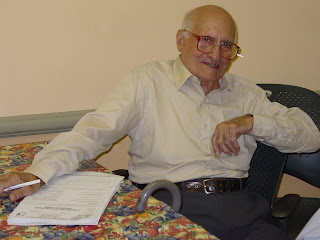 8:27 PM: Miezsko breaks it down, reading off the notes verbatim that he took from the Public Safety meeting. The Chairman Emeritus slips out quietly. You still got it Vinny! Three young female Columbia Journalism students get up and leave together. Don't they know there aren't any jobs?
"Hey aaron, are you writing right now? Can you check the weather?" asks Julia Morrow.
It's 72 degrees and overcast with an easterly wind of 7 mph.

8:45 PM: We've got a vote. The board essentially decides to table the motion, meaning that the Custom Wine Bar owners have to bring their application back to the Public Safety committee later this month. Time of deliberations?: 42 minutes.

8:49 PM: We're into Public Session!
Morrow talks about greenmarket and the New York City Ballet performance from 5-8 AM at McCarren Pool tomorrow
Ethan Hirshenfeld gets up to talk. He has a very loud, booming voice and reminds me of a young 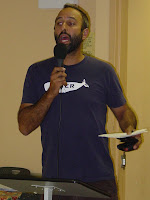 Vinny Abate. Yeah, I went there.
Ward Dennis: Oh wait, time's up. I have nothing to say. Thank you. No, two things. Monkeytown renewals. I oppose them strenuously. I understand concerns about bars, but many bars expect their neighbors. I' in th emiddle of six night spots, and Monkeytown is the only one that we object to. They have been consistently nasty, unwilling to talk, hang up on you, have street parties at 4 AM. Number 2, I have a problem with quality of life problem with car services, honk upon arrival. Serious issues on my block. You get approximately a thousand honks. You get 2-3 hours of quiet a night.
I think we have our meeting MVP. Sorry Mieszko. You gave it your best shot. 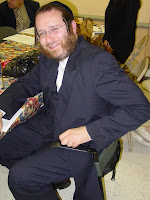 "I just watched a clip of you moderating a 33rd District Debate. Who do you think is going to win?"
"Uh..... recount?"
"Isaac Abraham, maybe third."
Simon's just warming up. He mentions he is opening up a mailboxes/ shipping, and photo supplies store on North 14th Street after the holidays.
"The Zalmanists are going to support Aaronists are going to support Abraham. If they were really smart, they would support Simon. They would look a lot better."

9:04 PM Old business. Great Names Hall of Fame member Del Teague adds a coda regarding noise complaints...
"I don't know what gets into people when they drink. They scream and carry on."
Motion to adjourn. We're out of here. Fast.
Posted by Aaron Short at 12:18 AM