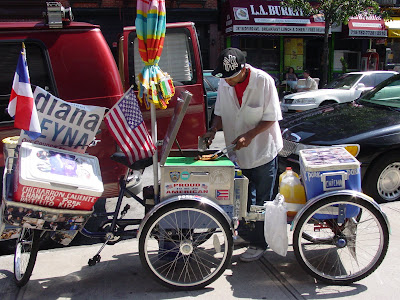 In a primary season blurry with endless endorsements, flyers, mailings and posters, one campaign gimmick stands out for its ingenuity and brilliant use of fried food.

At Williamsburg block parties and campaign rallies for Councilmember Diana Reyna (D-Williamsburg), a local resident by the name of Melanio Ferreira has been wheeling a blue tricycle with a plastic cooler and a small steel food cart that contains nubs of fried pork.He is known as “The Chicharron Man.” 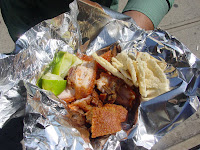 chicharron.He’s a staple of the neighborhood,” said Antonio Reynoso, a spokesperson for the Reyna campaign.

Back and forth through Williamsburg’s Los Sures, The Chicharron Man rides, stopping on the corners where people congregate and at parties whenever the streets are cordoned off.He has three prominent Diana Reyna for Council posters on his tricycle (she is running for reelection against Mariza Davila and Gerry Esposito in the 34th District), and a small boom box that plays a message urging passersby to vote for Diana.

“I support Diana because she is Dominican and her name alone warms my heart,” said Ferreira. “I’ve never lost a race in which I have put a candidate’s name and picture on his bike.”

In the steel box at the back of the tricycle is the chicharron, which Nio picks out with a slice of lime for $4. The treat consists of pork skinand various other parts of the pig battered and deep fried in hot oil, are a type of cuchifrito, which are often sold in the Puerto Rican neighborhoods of East Harlem and the South Bronx.

“They’re absolutely delicious. They’re hunger quenching,” said Reynoso.On some days, it’s the only thing Reynoso eats. He has already lost seven pounds since joining the campaign, and the entire campaign staff has dropped 44 pounds.Call it the Diana Reyna diet. Or the chicharron diet.Either way, in this pork-crazy borough, the Reyna camp may be onto something.

“I’ve never had better,” said Will Florentino, a Reyna Council staff member and campaign volunteer, who has lost 12 pounds since the campaign started.
The question remains, if reelected, will she continue to dole out pork to the neighborhood next year, like The Chicharron Man has been this past summer.“This is some tasty pork,” said Rob Solano, who stopped by the chicharron man’s tricycle last weekend.“Not bad for a guy in a cart.”