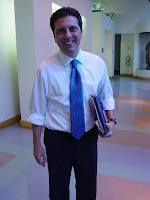 Eric Gioia is trying to keep hope alive On the Road to Runoff, and picks up the nod from The Daily News.

Here are the crucial paragraphs:
Of the four Democrats in Tuesday's primary, Gioia has the clearest vision for using the office to get results, an outcome that would give taxpayers a reason not to insist, as we have, on abolishing the post. He promises to avoid the "fake outrages and phony controversies" that have become the public advocate's hallmark.
Gioia's activism has been constructive. He fought the MTA on subway cuts to his district, which includes Woodside and Long Island City. He led the charge against Con Ed in the 2006 blackout, standing up to both the utility and Mayor Bloomberg. He mounted successful campaigns to bring the first bank branch to the Queensbridge housing project, convince City Hall to streamline the process of applying for food stamps and persuade Costco to accept them.
Gioia has also shown the courage of his convictions by backing congestion pricing, opposing the Council's so-called member items and donating to charity the stipend he gets for chairing the investigations committee.
Gioia is well-liked in Greenpoint, where he has been building a strong environmental advocacy record campaigning to clean up Newtown Creek, though Bill De Blasio has large union support, Mark Green is well known in Manhattan political circles and Norman Siegel has a long history of civil rights and legal advocacy. This one will go late Tuesday night.
Posted by Aaron Short at 3:44 PM

Gioia should have returned the money if he were truly a champion of our waterfront.