Candidate spotlight on Isaac Abraham
By Aaron Short Friday, September 4, 2009 8:29 PM EDT
Hasidic Judaism is filled with Talmudic rules and practices that must be followed in order to live a healthy, kosher life. But there’s only one rule to keep about going to dinner at the Williamsburg institution Gottlieib’s (325 Roebling Avenue) with City Council candidate Isaac Abraham: let Isaac order for you.
“He’ll have a plate of cholent and a kishka,” said Abraham.“It soaks in water overnight.It has a tremendous taste.”
“For the record, we make a very good piece of grilled chicken,” said Joseph Gottlieb, the restaurant’s owner. 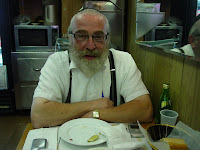 Abraham, 59, one of seven candidates running to replace David Yassky in the City Council, has been eating at the South Williamsburg restaurant for decades, when he is not enjoying his wife’s cooking.Abraham has lived his entire life within a five-block radius of Gottlieb’s in the Hasidic section of South Williamsburg.His family left Austria, where he was born, in 1952, and docked in Brooklyn when he was only two years old.
“I was born in the same town that Arnold Schwarzenegger was born in,” said Abraham.“We haven’t spoke since.”
In 1971, Abraham joined the volunteer ambulance corps and worked as a paramedic. In addition, he did work for a Meals-on- Wheels program that distributed meals to seniors on Shabbat.“You ring the bell and run,” said Abraham.
“You don’t see them and they don’t see who got it.”For the past three decades, Abraham has been a forceful advocate for residents in the Satmar Hasidic community, though not always for Hasidic residents, as he has pushed for improved living conditions in NYCHA buildings, increased police patrols in the 90th Precinct, and cutting wasteful city spending.
“I don’t expect everyone to know what I’ve done.I fought against Ed Koch against the incinerator.Hazardous air is color blind.It doesn’t discriminate.When a criminal needs his money for a hit, he doesn’t care who the victim is.I fight for everyone to prevent crime from happening.” 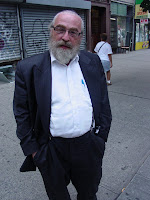 This is Abraham’s first run for elected office of any kind, though the Brooklyn Paper recently dubbed him the “Mayor of South Williamsburg.” The nickname appears to be well-deserved.
At Gottlieb’s, he knew everyone. From the three women sitting near the window who were friendly with his wife to the man sitting across the way who came up and greeted Isaac in the middle of the meal, everyone wished him their best.
“I got over 131 phone calls in a span of six hours,” said Abraham.“Before cell phones, you got regularcalls, you got information.Now, it’s become ten times more hectic. Every day it seems like your whole day is running on a deadline.”
For this campaign, Abraham is introducing a city budget proposal that he believes will save the city $1.2 billion by cutting non-essential services across several city agencies.Abraham wants candidates to talk more about city spending and public safety, and believes that his record helping people in the community will distinguish him from his opponents.
“It is easy to criticize agencies but if you don’t have a solution, don’t criticize.”
Abraham took a sip of his soda and smiled.He asked how the cholent was.It was delicious, as were the kishka and potato kugel.After dinner, a Hasidic woman came up to shake Abraham’s hand.“This man is very important,” she said.Abraham smiled and greeted his wife’s friends before he left the restaurant.
“Don’t forget to vote,” Abraham said.
Posted by Aaron Short at 3:52 PM

In addition, he did work for a Meals-on- Wheels program that distributed meals to seniors on Shabbat.“You ring the bell and run,” said Abraham.
“You don’t see them and they don’t see who got it.”

What? Everyone knows you're not allowed to ring the doorbell on Shabbas!

See article
"A Hasidic woman came over to shake his hand"

Isaac Abraham is not Hasidic, although he dresses like one, and neither is his wifes friend.