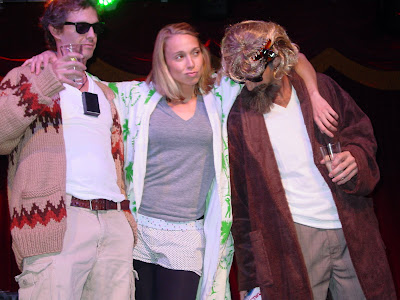 What does Lebowskifest and the Kapparot ritual have in common? They don't roll on shabbos.

With a solid Fall weekend bookended by Lebowskifest and Yom Kippur with three dueling arts festivals thrown in for good measure, fortunately the Short List rolls on through it. Friday saw the kickoff of the first ever Greenpoint Open Studios and the teenage (13th annual) Dumbo Arts Fair which will continue through Sunday. Your new councilmember stopped by, so if they're interesting enough for him, you should check them out too. You don't even need to leave the G train.

Saturday night there's the Last Supper Festival, which I previewed too, if you're looking for something last minute to do, or head to Greenpoint Gallery for the GOS afterparty. Sunday, if you're not art festivaled out, head to Maria Hernandez Park for CAPITAL B's I Heart BWCK Day to celebrate the heart of Bushwick. Bonus points for anyone who can tell me what the acronym stands for.

And don't forget to swing by Lee and Rodney for some ritual chicken swinging sin transferrence that is the Kapparot. It's hard to explain exactly. PETA was upset about it in 2008, but they've mainly left the Hasids alone this year. Here's a video posted just three days ago!

What else happened this week, you ask? The Comptrollers and Public Advocates are gearing up for a runoff on Tuesday with some last minute debates and ads, Flushing, Queens could see new influence in City Hall if John Liu wins, Diana Reyna is up 251 votes but there are signs of life in the Maritza Davila camp which may be back to work as early as Monday in the campaign office (you bet I'm tracking this one), Steve Levin makes the rounds, and it looks like Gerry Esposito ran out of money (he's spent about $5,000 than he raised according to Friday's CFB filings) which led to some former campaign workers posting a blog about it. Also, Kill Devil Hill, which has nothing to do with elections.
Much more to discuss next week from Newtown Creek's Superfund Listing to skateboarders taking over the burg (thanks Juliet Linderman!), and live reports from the David Yassky Runoff Party, featuring the Momptroller Tuesday night. Until then? Good luck with your sins. And Shake a Tailfeather!