I always secretly hope that one day, at a campaign after party, there's going to be volumes of champagne bottles that all the staffers spray on the winning candidate. Or at least, have the press liaison and the chief of staff dump a container of Gatorade on the candidate after a victory. That didn't happen at the David Yassky party Tuesday night. There was champagne available at BLVD (199 Bowery Street) in Soho, but it would cost you. I got over there at 9 PM just in time for the first few results to start trickling in and to watch Assemblywoman Joan Millman get deep-cavity searched by BLVD security (kidding, she kept her outside food at home).
I spotted Erik Dilan almost immediately, who is looking at a third term in office as Bushwick and Cypress Hills' Councilmember. Erik wanted me to emphasize that he was drinking ginger ale for the night. With a straw. My colleague Reid Pillifant over at The New York Observer was also sent to write copy for the night. He was holding a Budweiser (corrected! Not Amstel Light) and he did not look happy.
"Do you know how much this beer was? $8," said Reid.
A staffer came by and told us there would be an open bar if David won. Reid frowned. Thirty-three percent of the precints were reporting and David was down 15 points already. At least DJ Brian Switzer is happy.
We're getting our second wave of volunteers, and in walks former council candidate Evan Thies. He came in fourth, losing to Steve Levin (and Jo Anne Simon and Isaac Abraham), but was in good spirits. I asked him what he's been up to the past two weeks.
"I've been on vacation... at David Yassky's campaign office," says Evan.
Evan also went up to New Hampshire for a bit, where his family is from originally, and joked about trying out for the Red Sox. Unfortunately he missed September call-ups and Dustin Pedroia has 2nd Base pretty much locked down. "I don't know, those double play balls could be thrown a little quicker," says Evan.
On the other side of the room, NY1's Grace Rauh corralled Erik for an interview, before beginning her segment, "the mood here is somber..." and I get a text from Churches United for Fair Housing's Rob Solano, writing "Erik Dilan is on NY1 right now!" Dude. I know. I'm standing right next to him. Erik answers a couple of questions and looks at the television again. 76 percent of citywide precincts reporting and John Liu's margin hasn't changed. "De Blasio party," says Erik. He makes his way to the door but sees Evan Thies, for our first Awkward Handshake of the night.
Erik volunteered for Steve Levin's campaign, standing in front of the Gowanus Houses for most of the day. I'm not sure exactly if Erik knows who Evan Thies is. Evan knew who Erik was. I mentioned to Evan that he did not make an endorsement in the 34th District race because of his friendship with Diana Reyna and his reluctance to go against an incumbent Councilmember. "Really... that's interesting," said Evan.
At about 9:45 PM, New York 1 called the Comptroller race for John Liu and the Public Advocate race for David Yassky. The crowd was getting antsy. I notice Yassky spokesdude Danny Kanner rush in from the side and let Grace know that the councilmember called John Liu to concede and was on his way in five to ten minutes. I say hi to Danny for the second Awkward Handshake of the night. Right on time, at 10 PM, David and his family take the stage. 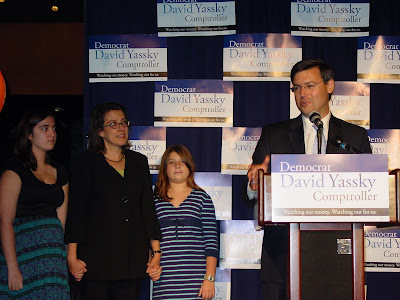 David thanked his supporters, family and hard working staffers while kicking into his concession speech... John Liu earned a well-deserved victory and I’m sure he will be a terrific Comptroller for the city of New York. There is still a vision of government that I believe in deeply, that you all believe in deeply, and truly tens of thousands of New Yorkers share and that vision has animated all of you tonight. David spent just over $4,000,000 on his bid to be City Comptroller, lost by 12 points, and received 7,000 votes less than he received two weeks ago during the Primary. 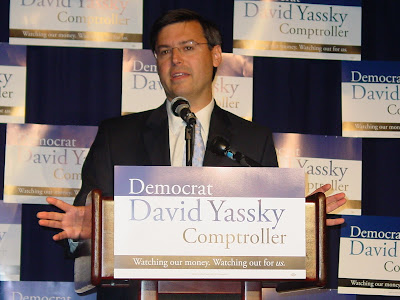 While there will be another time to talk about his legacy as councilmember for Downtown Brooklyn, Greenpoint and Williamsburg for the past eight years, tonight was not the night. After the speech, David waded into the thinning crowd to thank a large contingent of family and well-wishers who decided to keep drinking, even if the party wasn't open bar. I nudged my way forward for Awkward Handshake #3.
"Thanks for the Four Square," said David.
"Thanks David," I said.
I noticed David's mom Harriet, aka The Momptroller, who campaigned with him throughout the city, particularly with seniors. I don't care if John Liu won, she'll always be The Momptroller in my book. A final goodbye to Assemblymember Jonathan Bing and Councilmember Dan Garodnick (AH #4 and #5) and that would be it for the night.

Did you know that Jon and Dan are members of a barbershop quartet with David and Eric Gioia? Their name? The Four Horsemen of the Baroque-lypse.

Thirsty for champagne, I decided to make a quick stop at the Bill De Blasio after party at Union Bar. It was on my way home. I should have gotten there sooner. I had been getting texts all night that the place was elbow to elbow crowded. Marty Markowitz, Scott Stringer, Brian Kavanaugh, Dan Squadron, Joan Millman, Betsy Gotbaum, Erik Dilan, Bill Thompson, Jumaane Williams, and Gail Brewer all stopped by at one point.
The place was ransacked and empty, except for a few mingling volunteers, the new Public Advocate and his wife, and Rachel Amar, a former De Blasio staffer and North Brooklyn political junkie. A good rule of thumb that I use for determining whether a political event is worth attending is finding out if Rachel is going to show up. The campaign staffers had already left for an after after party on the other side of Union Square. When we caught up with them, every one was out on the street, smoking. Their treasurer was smoking a cigar. It was close to 1 AM and the staffers shuffled inside, while I talked with Assemblymember Brian Kavanaugh and 1199's Leah Gonzalez. Wait a minute... Is that Journey? I think it is! Don't Stop... Be-leeeeeeeeevin... 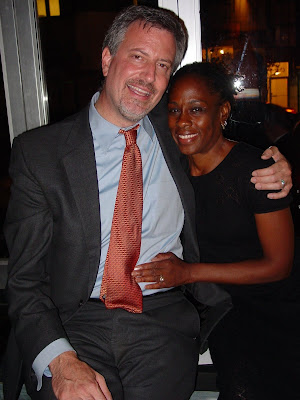 It was Budweiser, for the record and posterity.

Hi Aaron. On an unrelated note to the election excitement, the appeal for that power plant at N. 11th and Kent got dismissed by the Appellate Division. http://brooklyneagle.com/categories/category.php?category_id=4&id=31063
But they're going to keep trying and go to the Court of Appeals. Anyways I have some sweet art of the design if you want it, although it's really small-res on our website. Send me your address and I can send you a bigger version if you're interested. sam@brooklyneagle.net :)
Awesome election coverage, by the way.