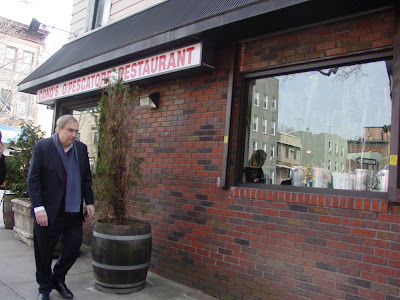 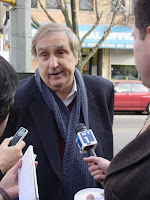 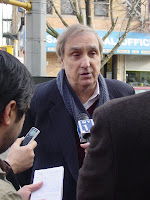 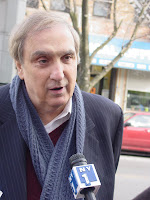 Lopez was joined by his A-Team, which included Christiana Fisher (RBSCC Executive Director), attorney Carl Landicino, legislative assistant and attorney Debbie Feinberg, and super-intern, Georgetown's finest Andy Marte. I didn't see Angela but I would be shocked if she wasn't there too. 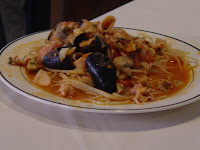 All sorts of reports have been coming in about the lunch this afternoon, including Steve Witt's report in The Courier (best headline: Dem Boss takes Ford on a test drive), Andy Campbell's report in The Brooklyn Paper (best lede: The path to the Senate obviously goes through the stomach of Assemblyman Vito Lopez.), Azi Paybarah's Politicker video, below, Liz Benjamin's Daily Politics blog at The Daily News, and Heather Grossman from DNAInfo who has been following Harold Ford around as he crisscrosses the state.

What was on the menu today? Political endorsements. Also, appetizers of baked clams, fried sweet peppers, fresh mozzarella and fried calamari.Vito didn't make an endorsement, saying he will wait 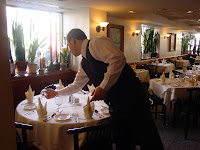 until April, but he emphasized Ford's speaking skills as opposed to Senator Kirsten Gillibrand's, which Observer reporter Reid Pillifant profiled this week. From Liz Benjamin-
"There’s a little of celebrity that he has - certain people have it," Lopez said of Ford. "I was impressed about his style, and he has a certain degree of charisma. I think he would do a very good job of connecting with people. He’s got a very smooth personality."

Vito had a lot to say today about Ford and Gillibrand, noting that even though Gillibrand was not really an incumbent (having been appointed by an unelected Governor a year ago), "incumbents around the country have a lot to worry about".
"When the economy is in shables and layoffs increase, and when [the state legislature] is 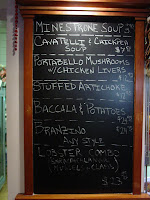 cutting budgets, people are concerned. There are no easy answers," said Lopez.
This was a good day for Vito. I have never seen him holding court with that many reporters before in Williamsburg, or anywhere else. Not when he was introducing Maritza at City Hall, not when he was holding a pep rally in front of his offices, not when he was hosting a Christmas lunch with Mayor Bloomberg and 500+ seniors. There may have been as big a crowd when Hillary came to town, but I wasn't there, and he certainly had more local television stations there today.
This was also a good day for Cono's Restaurant. I've been once and it was ethereal. Zagat's should bump them up a couple of points just for the politics-infused atmosphere (below). 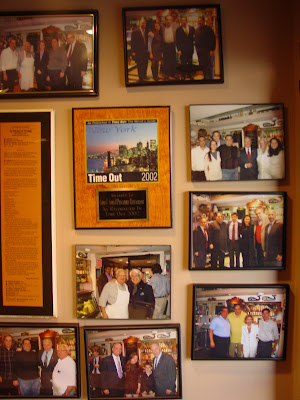