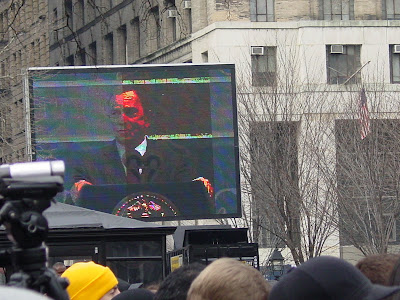 Mayor Bloomberg will now be appearing in public by Jumbotron
With just one more day until the Speaker's election in City Council, let's look back at the sights and sounds a chilly inauguration morning. 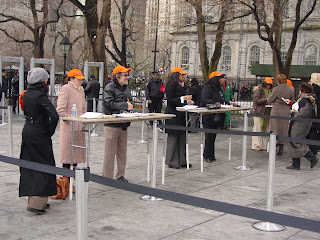 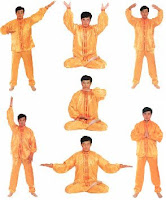 It started off auspiciously enough. Between 9 and 11 AM on New Years Day, scores of volunteers and Mayoral staffers in orange hats greeted invited guests at checkpoints throughout City Hall Park. Everyone was wearing orange and smiling so much it looked like a Falun Gong convention. Fortunately there was a bar. 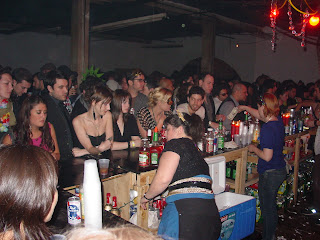 Actually there wasn't. This was 3rd Ward's New Years Eve Warehouse party that I came from a few hours earlier. Instead there were mobile trays serving coffee and hot cider. Also it was 25 degrees outside and the entire ceremony would be held outdoors. I got to City Hall just before 11 and apparently it was get your own row day in the press section. 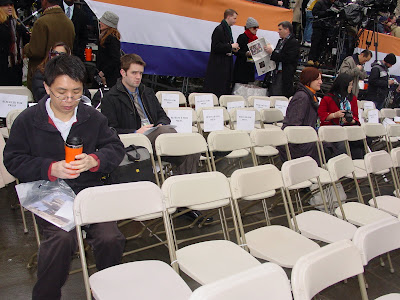 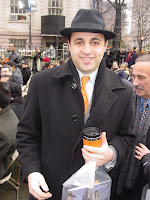 Time to see who's here. I spot 39th District candidate John Heyer wearing a spiffy black fedora, DL21c's Elizabeth Rachel Caputo, DEP's Michael Saucier, Johanna Greenbaum from the Deputy Mayor's office, 83rd Precinct Clergy Council President Michael Clarke, Borough President Marty Markowitz, and Examiner reporter Michael Harris who glued his tape recorder to his hand for the occasion.
But it was the Mayor's show as far as the crowd was concerned. Opening for the Mayor were Bill De Blasio and John Liu who would also be sworn in. De Blasio and his highly caffeinated communications aide (and Packer alum!) Matthew "Chicken" Wing were greeting several supporters at Stage Left before the show. Wing apparently missed the New Years revelry, staying up until midnight to tweak the speech. That's a tall order (sorry, I had to). 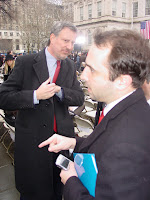 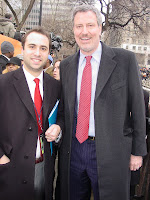 By 11:45 AM, everyone took their seats. Council members sat in the bleacher section at the front of the stage with Steve Levin sitting next to Tish James and Al Vann's beard. Just before the ceremony started, Council member Jumaane Williams delivered coffee to Speaker Quinn, Tish, Steve, and a few other members. He's just trying to get out of Council hazing. 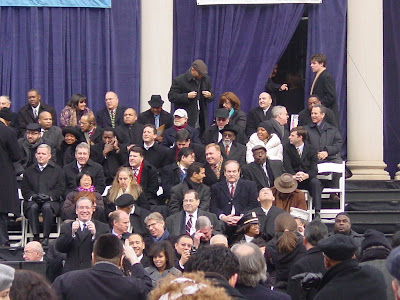 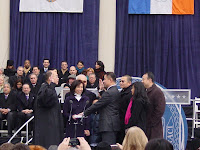 At noon it was time to start swearing in, but Press Row began swearing hours earlier. First it was John Liu who gave an impassioned speech about standing on the shoulders of giants (not Bill De Blasio), and referencing Barack Obama, Hillary Clinton, Percy Sutton and Justice Sonia Sotomayor as leaders who blazed a trail in the past year. He mentioned how his father loved politics, naming his brothers Robert and Edward and said that while he disliked labels, the one on the back of his neck reads "Made In Taiwan." 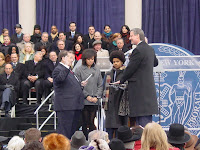 Then it was De Blasio's turn, who promised brief remarks and referenced Nelson Mandela's inspiring bid for reuniting South Africa by inspiring its poorly performing rugby team, the Springboks, to win the World Rugby Cup. De Blasio promised he would use the Public Advocate's office to uplift the spirits of a city still mired in recession by encouraging the Springboks in their bid to win the 2010 World Rugby Cup! Also, he's hiring Matt Damon to lead a new Community Organizing Department.

Then it was the mayor's turn. Bloomberg also spoke briefly and the buzz word was "fresh". Apparently now the Bloomberg administration will be taking a fresh approach to governance, which was the exact opposite of how many reporters smelled that morning. 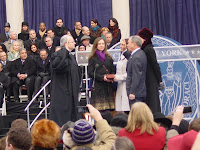 Bloomberg promised immigration reform and spoke about the drop in crime, improving environment and sustainability, as well as a new approach where deputy commissioners will be shifting periodically to different city agencies to learn their inner workings and improve their own agency.
"All you deputy commissioners out there, this is not a game of musical chairs. This is a managerial challenge. As I tell everyone, I hope you don't screw it up," said Mayor Bloomberg. 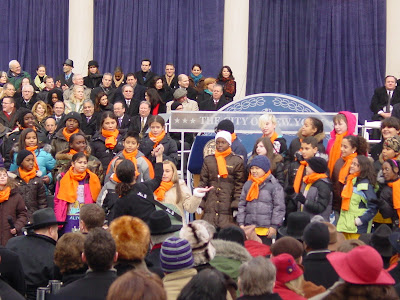 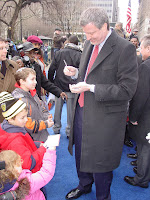 And that's as good a place as any to cut this off. After the speech, Bill De Blasio signed autographs for a group of middle schoolers who may have thought that he played with Patrick Ewing in the 80s. I made a beeline for the De Blasio after party, where I saw Council members Brad Lander, Steve Levin, Drinking Liberally's Justin Krebs, Working Families Party's Dan Cantor and Dorothy Siegel, and various others. But enough about that. Let's have the Staten Island PS 22 Choir play us out with "Run This Town" which was adorable and slightly disturbing at the same time. Kind of like the inauguration.
Posted by Aaron Short at 10:50 AM

That would be the 2010 FIFA World Cup. Different sport this time. And our team is Bafana Bafana.

It was a fun day indeed, many celebrations, a lot of people having fun, enjoying a beautiful day.