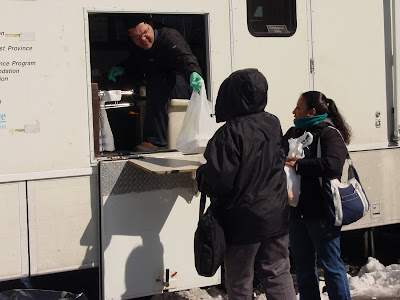 City Room at the Times went to the corner of Marcy and Division Avenues this week to write about the Polish and Mexican women who wait to work as day laborers for Hasidic women in Williamsburg. This is not a new story. The Times wrote about this as a citywide issue in 2005, the Gotham Gazette interviwed day laborers in 2001 as well as The Village Voice.

In February 2009, I interviewed several mobile soup kitchen workers from St. John Bread and Life in further depth. I can't find the link online, so here's an excerpt.

For the past eight years, volunteers from St. John’s Bread and Life have parked their Mobile Soup Kitchen on Marcy Avenue and Division Street, feeding dozens of day laborers looking for housecleaning work in Williamsburg’s Hasidic Quarter.
Once a week the Soup Kitchen comes, making one of ten stops throughout Brooklyn and Queens, providing meals and service referrals to some of the city’s most vulnerable residents. On Wednesday mornings, Sister Kathy Byrne and her volunteers make the drive to Williamsburg’s South Side, just outside the Williamsburgh Branch of the Brooklyn Public Library, The practice of women day workers seeking off-the-books employment in Hasidic households has occurred for several years, though Byrne has seen a rise in the number of laborers, both men and women, visiting the site in recent months.

"Oh yes, the population has definitely grown," Byrne said. "We’re serving 250 meals now when we were serving 160 last summer."
With the city’s economy in free fall, poorer groups such as Williamsburg’s immigrant Spanish women are among the most vulnerable to the economic downturn. The Food Bank of New York, which provides food items to St. Johns Bread and Life estimates that the number of people utilizing emergency food programs is up 25 to 30 percent.
"The biggest problem we’re seeing is that more and more people coming to our programs," said Carol Schneider, a spokeswoman with the Food Bank.

Some laborers have food stamps, but it is not necessary to present them to receive a hot meal. Most of the time, workers just come up to the van, stand in line, and receive a hot meal. A makeshift office big enough for two people has been set up in the backseat of the van, which Byrne and her outreach volunteers refer workers to if they are in need of additional services such as referrals for legal counseling, detox programs or shelters. Librarians at the nearby Brooklyn Public Library have also tried offering their services at the branch, but many immigrant workers are reluctant to fill out paperwork of any kind,
"We don’t ask for any ID. We just give them the food," said Byrne.
Another recent trend has been the presence of Polish women day workers at the site, who travel each day from Greenpoint. Agnes Sulewski, an outreach worker and Polish translator with St. Johns, estimates that as many as 70 women per day join the group, waiting to be hired by Hasidic households. Sulewski believes that the large population of Polish Jewish Hasidim has attracted the Greenpoint Polish women looking for work.

"During World War II, a lot of Jews were helped by the Polish and they are very grateful to them," Sulewski said. "They were citizens of Poland so they’re comfortable around Polish women."
Although emigration from Poland to Greenpoint slowed in recent years due to the growth of the Eastern European economy. members of the older generations, aged 40 to 70, who fled their homeland for opportunities in New York are the ones who now need assistance.
"Younger generations who could attend college are fine," Sulewski said. "Older generations do not have the possibilities for employment we have."
Posted by Aaron Short at 2:46 PM