Thoughts on the Karen Nieves Era 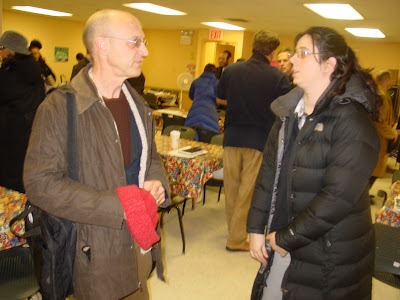 While much of the city media is running to Flatbush this morning for the Haitian community's take on the devastating earthquake that flattened Port Au Prince, (The Courier's own Flatbush correspondant Helen Klein is on Bedford and Rogers Avenues with the Mayor today), I'm going to reflect on some of the highlights on yesterday's Community Board 1 meeting. Admittedly, not my best running diary yesterday, but sometimes you just have to grind it out and this is a grind-it-out blog in January. 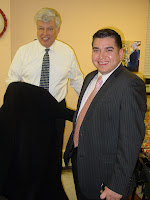 *CB1 member Karen Nieves is, in fact, not Latina. She married a Latino guy and adopted his last name. Speculation over this fact was out of control last night (it was a slow meeting), though the question bears significance in two ongoing stories: the Broadway Triangle Community Coalition's racial discrimination lawsuit (members have asked for counts of people of color on community boards one and three) and the recruitment of new members to the board this spring.
*Out goes Teresa Toro and Susan Albrecht. In comes Katie Naplatarski, Thomas Burrows and Rob Solano. Solano is the most recent addition to the board and he's got two features coming this week where he apologizes to board members for any past behavior that may have offended them.
*The City Planning Commission certified the New Domino project's EIS (Environmental Impact Statement). Not the plan itself. Sorry if there is any confusion. This is the beginning of a seven-month ULURP process.
*In case you want to know what CB1 Public Safety Chair Mieszko Kalita was talking about with regards to backyard licenses, it was this.
*There was also speculation in Press Row whether urban adventurer Marin Tockman was wearing a snuggie. She was actually wearing a hoodie, as the photograph below indicates.
Both Tockman and Tauber, right, submitted a letter to Community Board outlining a goal for a community-based transportation plan for District 1. Here are their 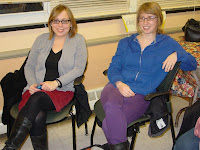 goals for the board:
· Advocate for affordable and increased public transportation options in our district, including maintaining essential bus and train routes despite the MTA's fiscal woes.
· Advocate for continued funding for reduced fares for school children and people with disabilities.
· Advocate for the Department of Transportation to immediately redesign intersections that they have identified as dangerous through their safe street for seniors program, including the intersection of McGuinness Blvd. and Nassau Ave. in Greenpoint, where another fatality occurred just last month.
· Increase the bicycle network within the district and reinstate the 14-block section of a key bike lane along Bedford Avenue from Wallabout to Division Street.
· Encourage the DOT to implement traffic calming measures on Wythe Avenue and North 11th St. to mitigate the effects of the rerouting of trucks from Kent Avenue. 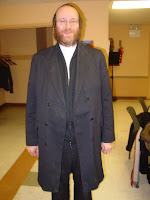 · Encourage police enforcement of truck routes throughout the district, and follow-up on the letter that the board sent to Mayor Bloomberg last year asking for a truck traffic enforcement task force for CB1.
*Community Board 1 Time of Possession: Chairman Chris Olechowski, 44:59 minutes. Everyone else, 45:01 minutes.
*CB1 member Solomon Bondo has opened a shipping/ photocopying/ internet store called the Media Zone. It's at 200 North 14th Street. 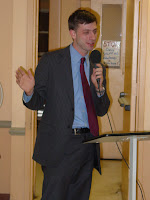 *After the meeting, Council member Steve Levin recommended I watch a video about Al Vann's role in the 1968 race riots. Unfortunately the closest thing I could find was this. Anybody know what he's referring to?
*Also after the meeting, Susan Pollock, of CPC Resources, made a whip-like motion in response to my nickname suggestion a couple of weeks ago. This is my "Top Play" of the night. Thanks Susan.
Posted by Aaron Short at 1:26 PM

All hail the advent of the karen nieves era.