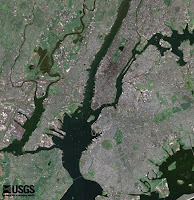 Via Mayor Michael Bloomberg and Governor David Paterson:
"Sunday’s game in Indianapolis will be as tough as it gets, but anyone who has counted out these underdogs the last few weeks has regretted it,” said Mayor Bloomberg. “Two years ago, we renamed Brady’s Bar ‘Manning’s,’ and this year we’re thinking even bigger. Starting today through the end of the playoffs, Manhattan Island is hereby renamed ‘ Revis Island .’ It’s been more than 40 years since the Jets won the Super Bowl, but Revis and the Jets have New York City abuzz. Denino’s on Staten Island serves up some of New York ’s best pizza, but I think Mayor Ballard will have to come east if he wants to taste it.”

“As a lifelong Jets fan, I remember that fateful January day in 1969, when the Jets upset the Baltimore Colts in Superbowl III. Though the Colts have since moved to Indianapolis , our New York Jets will again show them how it's done,” said Governor Paterson. “This season, we have watched the Jets defense keep points off the board and the offense make touchdown after touchdown. This team is not only competitive, it's high-powered and ready to win. J-E-T-S Jets! Jets! Jets!”
Posted by Aaron Short at 4:30 PM