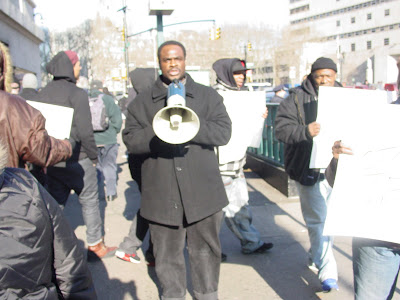 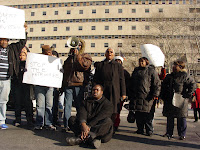 was elected without going through the Kings County Judicial Screening Process. There is an Errol Louis column in the Daily News about it (he writes about Robinson a lot) which a demonstrator was handing out yesterday in lieu of a press release. Sam Newhouse at The Brooklyn Eagle has more of the legal background of this story and Newsday covers it too
Some background: Kings County Chair Vito Lopez has met in the past with Taharka on a number of issues. Both were Clarence Norman supporters back in the day, and Robinson's mom, Annette Robinson and Lopez were vying to be his successor in 2005.
More recently, there has been some quibbling over Fisher's qualifications and I had a long interview with Fisher's colleague and friend, Carl Landicino, about this and why Fisher chose not to appear before the panel. Attorney Jo Anne Simon, who has served on the screening panel, also addressed this issue and had a different explanation.
There are two stories at work here. One regards the circumvention of the judicial screening 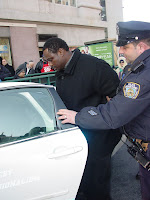 process and the ongoing issue of civil court reform. The other involves the political fissures in the Democratic Party that have been developing since September 2008, when an outburst occurred at a Kings County Democratic Committee meeting. Louis' column mentions the New Kings Democrats along with Robinson, though there were no New Kings present at yesterday's protest. Sources tell me that Robinson is interested in an alliance with NKD but so far their response (and Jo Anne Simon's for that matter) has been cool.
Finally, is it just me, or does every politcal activist in North Brooklyn have a Google News Alert for "Vito Lopez"?
Posted by Aaron Short at 12:42 PM

I find it funny that Robinson has spent the last two years re-branding himself as an "activist" after spending many, many years as a big money political consultant who benefited from his mother's connections. Doesn't hurt to have a major newspaper editorialist (EL) in your corner.

What I wonder is, why is he protesting this now? Fisher ran last year. Also, it was an open election for a local seat, Robinson has run dozens of campaigns (for big money). Why not run a candidate and show people how the democratic process really works?

I think if Robinson wants to be taken seriously as part of a new generation of political activists, he needs to tilt away from these quixotic political windmills.

Robinson told me he timed the protest to go along with Martin Luther King Jr's Day so he could invoke King's memory by noting an "injustice" closer to home. Then he walked into Court Street and got himself arrested.

I have been looking for some info about Fissure/ Fisher at 16 Court Street, and wow I have no idea that in the web were so many blogs related to generic viagra, but anyways, thanks for sharing your inputs and have a nice day.