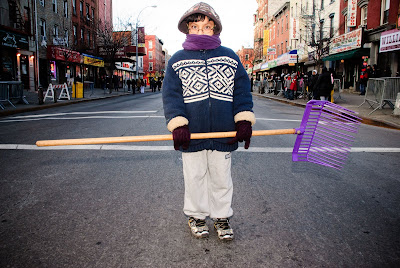 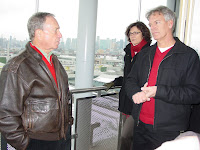 In honor of A Short Story's 500th post, this week's Short List is dedicated to those who do the dirty jobs in Brooklyn. From the 10 year old kid who had to shovel alpaca crap in 20 degree weather at the Three Kings Parade to Newtown Creek Wastewater Treatment Plant manager Jimmy Pynn, right, who had to show Mayor Bloomberg around the plant (motto: Where Sh#t Happens!) on Christmas morning.
It's dedicated to the political staffers who spend

countless hours cleaning up after the messes their bosses make. For the faceless reporters who spend their days in the trenches digging up facts and providing original content only to be skimmed and barely referenced by lazy blogs. For the political party bosses who have to deal with protest after protest over politics, the courts, and everything in between. For the up-and-coming bosses who are sometimes leading those protests.
For the subway workers steering cars and buses that will eventually get eliminated and 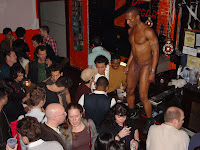 for dealing with self-absorbed hipsters who think anything no matter how tasteless or devoid of proper sanitation can be turned into a festival. For the development projects which start out with respectable names (144 North 8th Street, The Edge, New Domino) but end up sliding into self-parody thanks to snarky real estate writers (The Finger Building, The Edge, Sugarland).
And of course for the readers, who 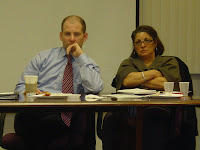 do the dirtiest job of all. Anyway, you want to know what's been going on. And DEP Commissioner Cas Holloway, left, is impatient. He wants to get this blog going. Hey, it's going to take at least 16 years to clean this thing up, but let's look at what's coming up.
*The No Pants Ride is over, but you can still show up with no 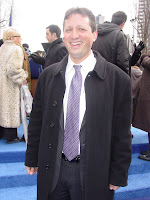 pants to Brad Lander's inauguration celebration on Sunday at 2 PM at the Prospect Park Picnic House. Just tell them Freed Schnapp said it was ok. Be there or be Four Square! What, are you really going to go to Dave Eggers' book signing? Lame.
*Also around Prospect Park, Council member Tish James and pop star Crystal Waters will be singing to save a Prospect Heights homeless shelter. I hope she sings 100% Pure Love. I'm getting junior high school prom flashbacks. There's the punch bowl. And there I am, serving punch to everybody.
*BushwickBK's Anna D'Agrosa has a full round up of arts events, including a heavy Saturday with English Kills and Famous Accountants in Bushwick.

*But really, you're going to watch football this weekend, and that's ok, because sitting in your couch for twelve hours downing half a gallon of chilli while watching the J-E-T-S JETS JETS JETS embarrass themselves in San Diego is a pretty important job. A dirty job? Definitely. We better send the kid from the Three Kings Day Parade to your place just in case. Don't worry, he's got his own shovel.
Posted by Aaron Short at 6:54 PM