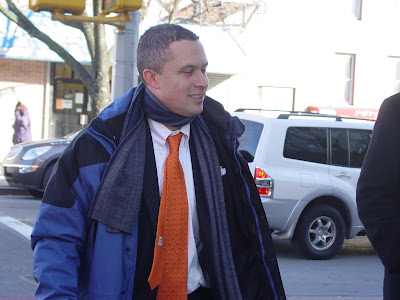 Harold Ford, seemingly wearing a field jacket stolen from a New York1 reporter, advanced on Cono's Restaurant for a lunch with Assemblyman Vito Lopez for the second time in less than a week this afternoon.
This time, the table was a little larger. It was a Fanatsy Owner's field day as Council members 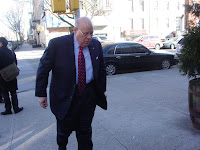 Recchia, Levin, Williams and Dilan were spotted entering the restaurant, as well as state legislators Jeffries, Camara, Adams, Dilan, Millman, and Senate Finance Chair Carl Kruger, who a Daily News photographer asked to pose for him multiple like he was Russel Crowe. Kruger just glared at him.
Not everyone is impressed with Ford, however, as several openly gay legislators chastised Ford at City Hall earlier in the day.
Reid Pillifant, who has been covering Ford for The Observer including his trip to Buffalo last weekend, was there inside the restaurant. So was City Hall News' David Freedlander. Both definitely have something cooking on this and I will link up once they finish.
One other note on this, besides the obvious conclusion that Harold Ford will no doubt be attending Thanksgiving at Ridgewood Bushwick to hand out meals to seniors this November. With Albany's budget in a quagmire mess, how did so many state legislators clear their schedule to get up to Williamsburg for a long lunch today no matter how delicious?
Posted by Aaron Short at 4:31 PM