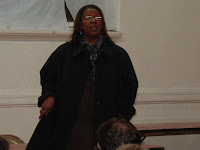 Updated: Tish will be joining Crystal for a duet of Gypsy Woman (Homeless Woman). Also, reporter Steve Witt will NOT be bringing his guitar to this event for an impromptu sing-a-long.
Posted by Aaron Short at 1:01 PM

Tiffany's biggest hits were in the '80s.