An example of the media spinning stories beyond the reality of what is actually happening... 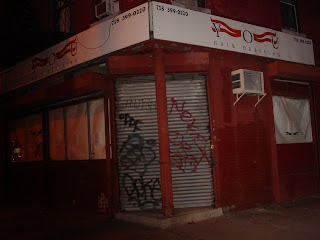 Last week, I wrote a story about a Community Board 1 Public Safety meeting, which typically features restaurant owners applying for permits and liquor licenses. Two restaurant industry guys (Stefan Mailvaganam and Dan Lathroum) had a proposal to build an upscale wine bar and restaurant (with locally sourced ingredients of course), called Custom, on the corner of Driggs and Metropolitan Avenues. Sounds great, right? Not to the residents of Fillmore Place (Williamsburg's 1st historic district) and the surrounding neighborhoods, who compiled a list of 23! bars within a block radius of the site. So I wrote about it. Neighbors had concerns about some gang activity in the area, though the primary issue was noise and rowdiness coming from a transient community. One feared that drunk people on the corners would not lead to a safe situation, and referenced the gang activity as a recurring problem.
Now... Eater and Gothamist have picked the story up as has Curbed and NBC New York. Naturally they've jumped on the gang activity-wine bar connection without giving enough consideration to the noise angle, which is really more of the issue here. I was also surprised with how rude the tone of the meeting got, though many of the points were vaild and Stefan contacted me to express this as well. Many of the residents also said repeatedly that this fight was not personal and they would actually go to Custom if it were not located in their neighborhood.
Posted by Aaron Short at 3:13 PM

You fail to mention in this blog and in especially in your
Williamsburg Courier article that this proposed bar is in a rent stabilized building across from four more such buildings that comprise some of Williamsburgs dwindling affordable housing. These people are awakened at 5am by trucks on Metropolitan Avenue so a bar with late hours no matter how yuppified and genteel will be seriously disturbing. Playing up the gang fears in the Courier article makes fun of honest people coping with real life problems in favor of those who have the leisure and the means to be sipping expensive glasses of wine. I guess you side with the new vision of Williamsburg and New York - but remember, you had to move to Bushwick yourself. And you wonder why the Eater/Curbed real estate flunkies took their customary smarmy tone - gangs vs pinot noir?? Get real.We're all losing in this kind of atmosphere.

Thanks i should be come your bar :)