Delia Can You Hear Me? 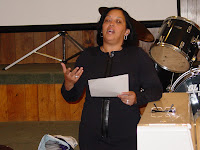 I don't usually cover Fort Greene issues, mostly because The Times' Fort Greene Local blog does it so well, but it's hard to miss this one by my colleague, Steve Witt, which has been circulating around the borough this afternoon. It all started because 35th District City Council candidate (and 88th Precinct Community Council President) Delia Hunley-Adossa doesn't return phone calls.
As reporters, we've all had this problem from time to time when community leaders don't call us back before our fast approaching deadlines. Or not at all. It gets frustrating for a week or two, and then you just acquire the sense that some people are better to get comments in person and you have to hustle to where they are appearing at a public event if you want to hear from them.
So Monday, Steve Witt wrote a story in The Courier about a tiff 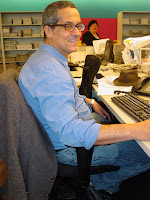 between The Fort Greene Local's Andy Newman and Hunley Adossa because she didn't return his calls. Newman has written a bit about Hunley Adossa before, including this extended back in March (and so has Norman Oder's Atlantic Yards Report, more on him later). In Steve's article, Delia accused Andy of being biased, which Newman didn't care for very much (reporters generally don't like being called biased, even if they are, though from the story, I don't think Newman was expressing a bias in this case), and then got a quote from Gersh at the Brooklyn Paper who also noted that Delia has been hard to get ahold of. Below from The Local:
“We at The Brooklyn Paper have been astounded by the lack of response to our questions from Delia and her campaign,” said Gersh Kuntzman, editor of The Brooklyn Paper. “She aspires to a very lofty position –- public servant –- and, as such, she needs to answer questions from independent media.”
Then, Norman Oder decided to jump into the pool and all Hell broke lose. The Voice linked it up, and, on top of all that, Norman mentioned that Steve is self-publishing his book, among other things. "Any publicity is good publicity," said Steve.
Three things to note here as this story gracefully peters out of the news cycle. Steve and Norman aren't going to be attending any galas or bar mitzvahs together anytime soon, and it probably has something to do with this and also this (I respect both men a lot and am afraid to get in the middle of anything) . At this point, Steve is worried that Norman is going through his garbage. Guys, can't we all get along? Why, Atlantic Yards? Why?
The other, more interesting side note throughout this is that one of the bases of Hunley-Adossa's

accusation of bias is that Newman once sang with a Tish James staffer at a karaoke party (The Local credited to Robin Lester, right, updated).
Newman replied that the event was an apolitical birthday party for a blogger who does the Clinton Hill Chill and said "At such a politically neutral event, I would be happy to sing with one of Ms. Hunley-Adossa’s staffers,” to which Hunley-Adossa replied "I'm not sure he would sing with one of my staffers." Yikes. What would Newman and Hunley-Adossa sing if they were at a bar during Karaoke night? Call Me by Blondie?

More intriguingly, what would Steve and Norman sing together? Probably Queen.
Posted by Aaron Short at 9:41 PM

I'm glad you're having funzies w/the karaoke stuff, but, when it comes down to it, journalists are supposed to evaluate the information in front of them.

I didn't simply "mention[] that Steve Witt is self-publishing his book, among other things."

I pointed out that "his own newspaper recently published an article about his new novel while omitting a crucial fact--that it is self-published--that the author has apparently tried to obscure."

As for Delia Hunley-Adossa not returning phone calls, note that she has not been holding public events at which reporters can find her for a quote.

Most candidates are desperate for publicity. This one isn't. Why? I suspect it's because she's wary of scrutiny. She returns Witt's phone calls because he has no interest in scrutinizing her, just enabling her.

Norman, that's an interesting point that I wasn't aware of. Not holding public events is a whole other thing and that got lost in this. She has a public safety record to run on. Why isn't she doing that? Is Atlantic Yards really the most dominant issue in the 35th?

There's a Calendar of Events on Delia Hunley-Adossa's web site--empty.

Below from her opening page (but go to the site for the graphics).
http://www.deliahunley-adossa.org/

For the past several years we have seen what a lack of effective leadership has done to our community. Aren't you tired of politicians who put politics before the people? Isn't it time for Change? Aren't you concerned about where you will live, or how you will provide for your family financially?

Delia M. Hunley-Adossa has a proven leadership record in the community as an advocate and a voice for this community. Speaking out against injustice and standing up when it counts. She believes the priorities for this community are Economy, Education, Affordable Housing and the Environment. Delia believes that people are always first.

Great article as for me. It would be great to read more about this theme. Thnx for giving this information.
Joan Stepsen
Cyprus escorts

Great stuff from you, man. Ive read your stuff before and youre just too awesome. I love what youve got here, love what youre saying and the way you say it. You make it entertaining and you still manage to keep it smart. I cant wait to read more from you. This is really a great blog.Couldn?t be written any better. Reading this post reminds me of my old room mate! He always kept talking about this. I will forward this article to him. Pretty sure he will have a good read. Thanks for sharing!