Who's bad... Michael Jackson's doctor for one.

It's been an elegiac week, with the death of liberal lion Ted Kennedy, crime writer Dominick Dunne, more revelations about the Michael Jackson homicide, and the chillingly prescient must-read story about New Orleans doctors on the 4th anniversary of Hurrican Katrina. In Brooklyn, however, we're in a celebratory mood, with Donna Summer leading a "Last Dance" at Coney Island, Charlie Parker Jazz Festival (ok, it's Thompkins Square Park in the East Village), the last Pool Party of the season featuring Grizzly Bear, and Michael Jackson Day in Prospect Park hosted by Spike Lee and The Reverend Al Sharpton. Did we mention that Letitia James wants to rename Hoyt Schermerhorn station after Michael Jackson but the MTA says no? The MTA. They don't care about us.

Donna Summer isn't the only one Working Hard for the Money, as many Council candidates have added the max amount in public matching funds to their coffers and now spending freely on campaign literature, flyers, Internet video spots, mailers, fancy campaign consultants and Adderral. Some candidates have been on a short fuse recently but they were all cozy in the same room on 110 Kent Avenue for Town Square's Summer Starz campaign forum, yesterday night, talking to small pockets of people. Thank God there was food. Nice job Susan Anderson. 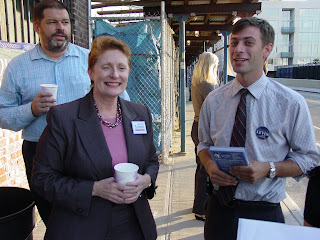 Over at the Greenpoint Gazette, check out a hot profile about The Vivian Girls and Brooklyn Brine plus Juliet Linderman's piece on the Doug Biviano Health Care panel. At the Brooklyn Paper, Ben Muessig has some more Marty news, Mike McLaughlin says the Dream is dead, and they've got the Mayor Bloomberg video, but skip that and read about all the local mayors in Brooklyn instead. And there's bits of music news too, such as Whitney's Biennial, the Knitting Factory reopening on Metropolitan Avenue, a jazz review, and a pop preview at the Times, and BushwickBK's weekly picks too, led by the Bushwick Film Festival and a new show Saturday at English Kills.

But perhaps most importantly, a friend and fellow BushwickBK contributor Diego Cupolo recounts a horrific episode where a man tried to steal his bicycle and it resulted in an assault. Still shaking my head at that one. Let's hope this isn't the Last Dance.