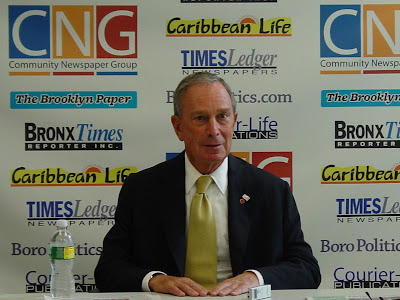 The mayor slowly realizing that participating in this forum may have been a bad idea.

This week, Metrotech has been welcoming scores of candidates for City Council and the Mayor's race. We've already done the 33rd and 39th debates, as well as Comptroller and Public Advocate, so that leaves... pretty much everyone else. Every competitive race in Brooklyn has been showing up including the Fiesty 40th, the Fierce 41st and the Fightin' 35th. Only the 34th District (Diana, Gerry and Maritza) has been postponed and has likely been canceled. Those candidates were doing one-on-one interviews with El Diario this week (I ran into Martiza and one of the Reyna Boys downtown) as well as Brooklyn 12, airing Monday, and possibly two forums next week. Plus there's a Village Voice piece coming out soon on the 34th, so people are paying attention. 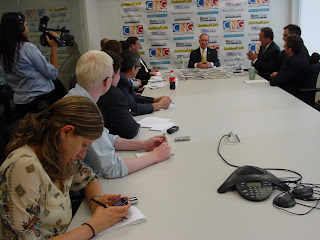 But enough chit chat. Let's get back to the mayor's race. It's always fun when the mayor shows

up to your office because you get to meet the security team. This means lots of tan, beefy ex-cops with crew cuts and wireless earpieces patrolling the perimiter and I become briefly skittish about getting up to get a cup of coffee or use the bathroom. One guy looked like Dennis Farina. We showed him a picture. He agreed. As Dennis Farnia says, "Do whatever you're directed to do, and leave the rest of that technical stuff up to the director." Also, "Chili Palmer! It's chilly outside and it's Chili inside. It's a regular $#%@in' chili-fest!"
With a throng of reporters from four different boroughs (sorry, Staten Island) The Mayor touched on a number of topics from Coney Island to Willets Point to the CBA to Atlantic Yards and whether Brooklyn South is a precinct (It isn't. It's lots of precincts). Earlier in the day, Democratic mayoral candidate Tony Avella (D-Bayside) arrived all by himself with no handlerss (I think he took the bus) to wax on community-based planning in Brooklyn and The Bronx. The Queens reporters were well familiar with Avella, having done a profile with him earlier in the week. I was hoping Steve Witt and Tony would schedule a play date later, but sadly, that was not to be. Tony didn't even buy Steve's book. 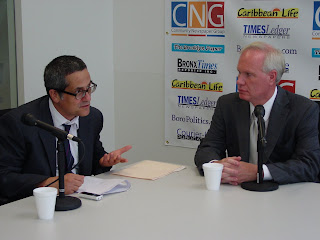 "Tony, it's called American Moses, and it's available on Amazon.com for only $14.95"

Three council races dropped by the office to for a little tender Q and A, including the 40th, 41st and 45th. 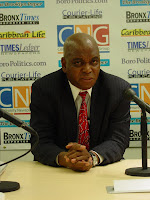 Which means I got to meet Room 8's Rock Hackshaw. Can you smell what the Rock is cooking? Looks like a fresh pound of beef with Rickie Tulloch. Both men have been immediately inducted into the "Jack Hammer Brooklyn Great Names" Hall of Fame, joining Gersh Kuntzman, Vinny Abate, Jumaane Williams, Ward Dennis and Del Teague. First ballot. Lincoln Restler is Second Ballot all by himself.

I sat in and photographed Tulloch, Hackshaw, and Incumbent Councilmember Matthiew Eugene, (Flatbush, East Flatbush) for their 40th District Council debate, which Helen Klein moderated. Midway through, I thought Eugene was about to punch Tulloch after his comments about not bringing in enough discretionary funding to the district and letting in too many homeless shelters, thus making him "a weak leader". Eugene didn't like that.
“This is misinformation,” Eugene replied. “You say I’m weak. I’m a strong leader. I’m not afraid to stand tall for the people, even when it is difficult for me.”
Hackshaw jumped in and beat up Tulloch for "spreading lies" about him moving back into the district in order to run for city council.
“In a democracy, you can challenge the incumbent,” Hackshaw said. “We don’t go around spreading lies and cutting people down.” 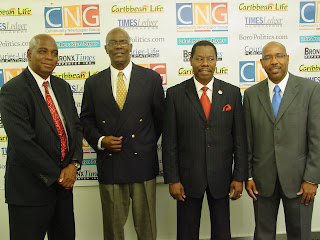 40th District: Feel the love.
I photographed the 41st District too (Bedford Stuyvesant/ Ocean Hill-Brownsville), moderated by Steve Witt, which featured Tracy Boyland (of the Boylands), Anthony Hillard, Tulani Kinard and Incumbent Councilmember Darlene Mealy. Steve's article is online and the tape should be available Monday, which would give me the opportunity to check exactly what it was that Darlene Mealy said in her answer about reducing HIV/AIDS rates in her district. All I remember hearing was "clown sex", and Mealy mentioning that she was against that, while Boyland and Hillard blanked. Maybe we better just leave it off here. 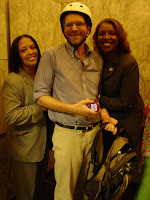 Finally, Letitia James, Delia-Hunley Adossa, and Medhanie Estiphanos (35th District, Fort Greene/ Clinton Hill) dropped by late afternoon to settle some scores. First off, Hunley-Adossa her unreachability, saying that the reason why she didn't return reporters' phone calls was because they were calling her cell and her home number, and she won't return calls on private lines until after the election. But enough about that. From the reports, it sounds like Tish mopped the floor with the others (Note: Actually, it was a little more even than that, though Tish did well and Delia didn't say too much. There will be a few more forums though before the primary).
It's all fun. Afterwards, we tried to see how many candidates we could stuff into an elevator. The answer? Three candidates. Plus Gersh.
Posted by Aaron Short at 11:25 AM