To Witt, By Greg Hanlon

The following is a guest post by my former colleague, Greg Hanlon. He graciously attended Steve Witt's book launch while I was out of town this weekend. Enjoy! -Aaron
Downtown Brooklyn- Steve Witt is a Jack-of-All Trades: hard-boiled reporter, subway musician, 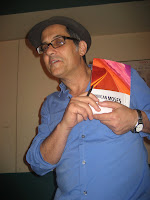 doting father, and Jim Beam aficionado rolled into one. On top of all that, he found time to write his debut novel, American Moses, the reason for last night’s launch party at Harry O’s Bar and Grill in downtown Brooklyn.

Are you familiar with that ongoing joke on Family Guy in which Stewie needles Brian about his perpetually unfinished novel [LINK]? For months, the opposite scenario was common at the offices of the Courier (where I worked until two months ago): It was Steve needling us about his novel, and the book was finished. But he had good reason to be proud: It ain’t easy to write a novel while banging out 10 news stories a week. Frankly, I can’t think of a more difficult day job to have for a would-be novelist.

Say what you want about Steve – Atlantic Yards Report’s Norman Oder bestowed his “Brutally Weird” tag on him some months ago – but the man keeps it real: Forget the tuna sashimi and pate on bruschetta; last night’s hors d’oeuvres consisted of mealy meatballs and buffalo wings. Harry O’s, the venue, was vintage Witt: It was a little seedy and perhaps not the cleanest place, but if you let your guard down, it was soulful and fun.

In the Courier offices, Steve was often the butt-of-jokes. He once told me that it was easy for 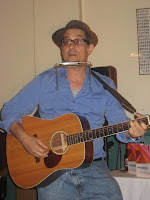 people to pick on him because he has one of those out-on-the-table personalities, which opens him up for ridicule. But his personality also engenders affection. How else to explain the presence of three former co-workers at the party, along with Courier editor-in-chief Ken Brown? Indeed, people packed the back room at Harry O’s and stayed late. When Steve grabbed the guitar and harmonica and broke into song – he led off with Bob Dylan and The Band’s “You Ain’t Going Nowhere” – people clapped. Most importantly, people bought the book, kindly signed in the author’s chicken scratch.

I haven’t read the book – I plan on doing so this weekend – but as Aaron mentioned in a previous post, the book is “an unconventional love story between a husband and wife who lead an unlikely congregation across America to the ‘Promised Land’ – of Las Vegas.” I have high hopes – Steve’s an excellent writer with the expansive, devious mind that makes for a good novelist.

Last night, he read an excerpt from the book, but it was another passage that caught both my attention and that of my Courier buddies. Without further ado, the sex scene on page 109, abridged and reprinted without permission:

Slowly, Zippy began to relax as he gently rubbed her shoulders and neck, then kissing her soft 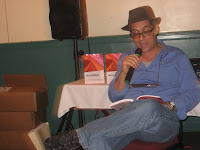 cheeks, forehead and neck. At last she looked into his face and their lips met with soft, small kisses at first, before turning to longer passionate kisses, where their tongues met, and they gently bit each other’s lips…. [Breasts are revealed, yada yada yada…] And every little reaction and quiet moan turned him on more, making his member grow stronger and harder. At last he mounted her…

I’ll leave it off here. Wanna know what happens next? You’ll have to buy the book, available for $14.95 plus shipping at http://www.neversinkbooks.com/.

For the record, I've used the term "brutally weird" in the context of Atlantic Yards to describe numerous things, such as the purchase by Rupert Murdoch of the Brooklyn Paper; Post columnist Steve Cuozzo's calling Develop Don't Destroy Brooklyn "Orwellian-titled"; and the New York City Department of Finance's decision to use a lot in Alphabet City to help set values for the Yankee Stadium site in the Bronx.
See:
http://atlanticyardsreport.blogspot.com/search?q=%22brutally+weird%22

Outstanding, my little ninja friend. Witt is the bomb...you captured him perfectly. One would have to be brutally weird not to love him.