Ok, I've been told there WILL be a debate tonight in Williambsurg (161 South 3rd and Driggs) at Primera Iglesia Prespiteriana. El Diario, Greenpoint Gazette, Churches United for Fair Housing, and others will be attending, so expect a decent crowd. Carmine from El Diaro has been hustling around Williamsburg and Bushwick all day to ask what's on YOUR mind in the 34th District, for this first public debate. The question is, will all the candidates show up? Diana Reyna's camp says she's coming. Gerry Esposito and Maritza Davila were leaning against coming but will they lean the other way? 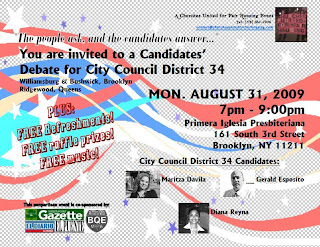 Both candidates' camps confirmed with me they weren't coming after I put the post up. Solano was working them pretty hard up until that day, giving them room to change their mind. I heard "we'll think about it" from the camps which isn't a definitive no. So hold on tight.

WHAT A JOKE!! This "debate" was such a setup by Diana and her crew ( Rob Solano, Esteban Duran and Will) Aaron I am surprised at you stooping so low to play this little game. Obviously by your title you suspected it. Why else would 2 candidates reject an invitation to a debate?