Who is Real Reform Brooklyn: A Poll

“Not only has Evan violated his stated pledge to run a positive campaign, he doesn’t have the backbone to stand up in the light of day and criticize his opponents openly and honestly,” said Biviano. “There’s nothing wrong with questioning your opponents’ records in a campaign – that’s what a campaign is about. But at least have the guts to take responsibility for your arguments.”

The Thies camp says its not them. The Biviano camp says it's not them either. Jo Anne Simon's camp is exasperated at the posts, and Steve Levin just keeps knocking on doors. Even Maureen Dowd is writing about cyberbullying this week.

We need to settle this. Here's a poll of potential Williamsburg/ Greenpoint/ Brooklyn Heights characters who might be Real Reform Brooklyn. Vote on your favorites in the comments section in no particular order: 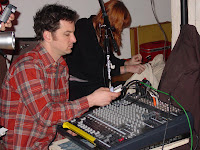 6. Councilmember David Yassky (Dude spends a lot of time on his blackberry) 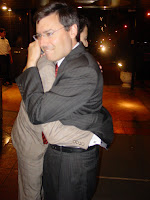 10. Flight of the Conchords' Jemaine Clement (this is my vote).

Evan Thies. And elf is the perfect term for Rizzo.

Another perspective on this would be as an investigative reporter. What do we really know about this "we" character? Maybe you could help concoct a psychological profile?

For example, how did Mr./Ms. Real Reform (with tapeworms) know about JoAnne Simon's stance on the Choice issue? How did Real (Tapeworm) Reform know about Steve's pad in Exxon Oil spill territory? Also, RR is someone with lots of time on their hands. Any other clues?

Aaron, could you do us the gracious service of providing some of these facts? That might illuminate the true culprit.

We could investigate which Brooklyn residents have been treated lately for intestinal parasites and go from there!

could it be Aaron Short....he has all the scoops...think it about..he's the last guy you would think of..but maybe he's the first guy you should be thinking of...

Well, if Aaron has been Short on stories, then hmmm... Could be him! lol

True 3:10 on 8/26- only RRB or Evan Thies could possibly use the term red herring. Great thinking! The Thies campaign also authored the 15,500,000 google hits that red herring turns up!

And control the media. And the weather...

Yes, of course, it's me. If anything, I'm not writing enough about the 33rd District race. By the way, Moses Gates says it's not him, so let's substitute Josh Skaller consultant Steve Stites and/or candidate Isaac Abraham in his place.

It's either Thies or Ken Diamondstone. Both campaigns should really be facing the heat to either denounce the blog or state publicly that no one that they are associated with has anything to do with it. Other campaigns around the country have taken serious hits for doing something like this, and some places have even passed laws prohibiting campaign material that is anonymous.

We have looked into it. We understand that the Greenpoint project is an as-of-right development with a remassing (no extra square footage) to accommodate wetlands preservation and a DEP outfall. Also, the developer has allowed for an expanded street-end park, a summer film series and a public art installation. You seem to be anti-any development along the Greenpoint/Williamsburg waterfront. Perhaps you would prefer transfer stations and power plants? We imagine that could be arranged.

Mr. Perlutter (who was under the hire of developer George Klein at the time), as quoted by NY1 on April 4, 2005:

“Without rezoning we will have power plants, transfer stations and industrial uses that will forever close the door for our community to recapture its waterfront..."

Not sure this qualifies as "cyberbullying". Doesn't that indicate unfair attacks and blatant inaccuracies? Seems this person (or persons) is having such an effect on everyone because there is a ring of truth in it. Seems pretty well-researched.

Not that anyone cares anymore, but it was Doug Biviano.