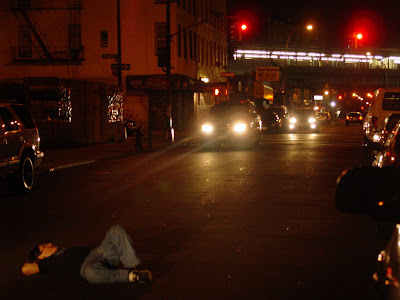 This Bushwick man is lying in the middle of Gates Avenue at 12:30 AM last night because...
A. He is drunk
B. He has a mild death wish
C. He is resting up for Saturday afternoon's exciting discussion about The Politics of Community-Based Organizations with Professor Nicole Marwell!

If you guessed C, then I hope to see you Saturday at 2 PM the Bushwick Branch of the Brooklyn Public Library for a riveting discussion about political campaigns, nonprofits, religion , and... um...
Summer may be winding down, but news across the Borough is heating up, with campaign events occurring hourly and no end in sight. I had a dream the other night that I was wandering through the halls of the Jacob Javits Center and every room was filled with a different candidates debate, forum, or meet and greet event, and they were occurring in perpetuity, kind of like the test stage in Charlie Kaufman's Synechdoche, New York. Wait, that actually happened? Ugh. 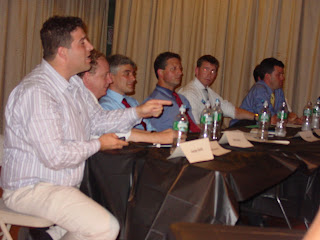 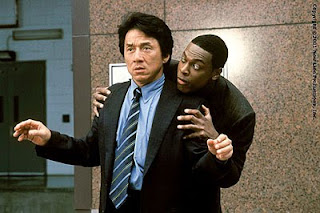 The Greenpoint Gazette's Juliet Linderman is off to Pennsylvania on a research trip, but read her EWVIDCO profile (Part IV!), and her trip to Pete's Candy Store for an interesting feature. In Bushwick, there's a cool profile about playwright Mac Rogers, Factory Fresh's slamming opening, an eviction on 889 Broadway, and my recap on Darma Diaz's temporary derailed bid for City Council. In Williamsburg, there's an intriguing look at Art Guerra's art supply store, Phil DePaolo's upstate musings, Ben Muessig's look at the 34th District City Council race and the Broadway Triangle, and a new restaurant on the South Side.

More debates and forums are on tap this coming week, including Assemblymember Vito Lopez's Thursday night transportation forum, as well as a busy weekend in Bushwick for arts events including a massive party at 979 Broadway and the second to last East River JellyNYC Pool Parties. But really, you're coming to the book talk at the Bushwick Branch (Siegel and Bushwick Avenue, just off the Montrose L), right?.... right?.... maybe?
Posted by Aaron Short at 4:41 PM