Four Square and seven years ago 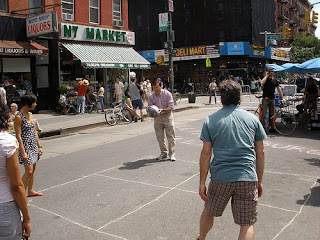 Williamsburg- While I was at the Statue of Liberty and Battery Park City Saturday afternoon, reports began leaking of of Councilmember David Yassky holding court for a Four Square match at Williamsburg Walks. Surely they were imagining things. David would never stoop to such

public and violent degredation. But the photo appeared on the NAG blog Sunday morning, and there he was. Several NAG and Williamsburg Walks members confirmed that Yassky dominated the match for over an hour, defeating ULURP Chair Ward Dennis and NAG's Michael Freedman Schnapp, right, who appeared to cry slightly after succumbing to one particularly long rally.

Now. I have a strong emotional attachment to Four Square, ever since I patrolled the

raised tar courts of the Holiday Hill Day Camp as a wee future journalist. With equal parts tenacity and grace, my reign in the Ace position roughly coincided with Pete Sampras' dominant streak on tennis' grandest hardcourt stages. Ace was my nickname, in fact, and I even had a signature rally-killing move known as Mr. Treetop. I retired at the age of 12 and have never thought about Four Square since... until this moment. 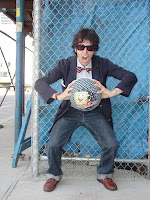 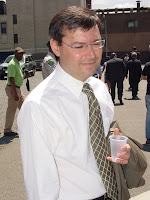 Yesterday, at a press conference for the groundbreaking of Bushwick Inlet Park, I took the opportunity to announce my formally challenge David to a no-balls-barred, balls-to-the-floor Four Square Death Match. David agreed. His office confirmed again this morning and we just have to set a time. 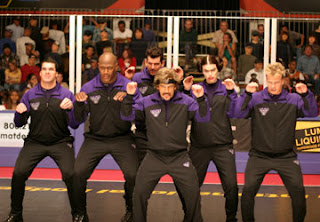 NAG members, above, were no match for David Yassky Saturday 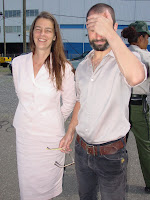 I'm going to be blunt. Everyone in Greenpoint and Williamsburg needs to push pressure on the Councilman to SHOW UP on Saturday afternoon or HE WILL WEASEL OUT. I'm talking to you, NAG members! David's District Office can be reached at 718-875-5200 extension 14. Ask for Rami "Scrap" Metal, pictured at left. Rami can't bear to witness the Four Square-related carnage that will occurr on Saturday. Start working on that concession speech, Rami.

I will have updates througout the week on my training, strategy, the official weigh-in, as well as a round of interviews during Media Day on Friday. Oh, and the winner gets to rezone any two-block stretch of R-6A residential housing on the waterfront back to M-1 heavy manufacturing.
Posted by Aaron Short at 1:04 PM

Oh man. Of all the things I am going to miss while I am in Texas this weekend, I am saddest about this.

I think you have to offer an exchange for the privledge of playing with David, he's a politician, afterall.

I'm sure Ward Dennis or Freedman Schnapp would never let Yassky win in hopes of some future job or appointment. And I'm sure Yassky would never take part in anything like that.
Yuk.