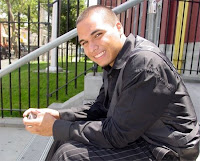 Husly Rivera, 18, was born in Brooklyn and has lived in Bushwick his whole life, only three blocks from the Academy of Planning at the Bushwick Campus, where he attended high school. Rivera is only the second student in the modern era of the Department of Education to record perfect attendance from Kindergarten through 12th Grade.

After graduating from the Academy of Urban Planning two weeks ago, with a 94 average and 3rd in his class, Rivera has been working this summer in a local furniture store and will attend John Jay College, majoring in Criminal Justice, in the Fall. The oldest child of four, he is the first member of his family to finish high school.

We caught up with a very dapper Rivera on the steps of the Bushwick Campus to hear more about how the legend of The Streak began, who his heroes are, and whether swine flu would have kept him out of school.

When were you first made aware of the importance of your perfect school attendance streak?
It meant something to be at the beginning of senior year when I realized that I was doing something that no one else has done.

How did your teachers and friends encourage you?
Nobody ever knew about it until a school assembly where Assistant Principal Janet Mirando and Principal Monique Derrisaw told everyone that I never missed a day of school. People were shocked. I never told anybody.

Did you receive any honors from the city or your school?
I had a meeting with Police Commissioner Ray Kelly on the 30th of June. He congratulated me and gave me advice on detective work. It was kind of awkward. I never thought I would meet him in person.

Did anyone try to stand in your way?
No. Nobody knew about it. I was going on it all by myself.

How worried were you about contracting swine flu?
Not at all. I know there were a couple of cases. I didn’t think I would get it due to my strong immune system.

Any other close calls?
The only day that came up was prom night where I partied from 7 in the evening until 7 the next morning and I came to school at 8 AM. I didn’t sleep at all that night. Out of 90 seniors, only 6 showed up the next day (prom was on a Tuesday). My teacher didn’t show up the next day because he went to prom.

Who are your heroes?
My heroes are my parents, my teachers, and all my friends who supported me. And my girlfriend.

What is your favorite part about going to school in Bushwick?
Going to school made me feel safe. Nothing really goes on in school. You just learn and you avoid problems going on in the streets.

What do you think of all the hipsters moving here?
I think it’s pretty good. People are following them. I know [some hipsters] skateboard and everybody skateboards around here nowadays.

Any advice for young future perfect attendees?
Just keep yourself motivated and don’t let anybody bring you down.

By the way, there is a similar case like Cal Ripken: Suveg Singh Khattra. Khattra went to the U. S. Sikh Temple in Oak Creek, Wisconsin, every single day until he was shot dead with the hero and a legend, Satwant Singh Kaleka.