Associated gets its due 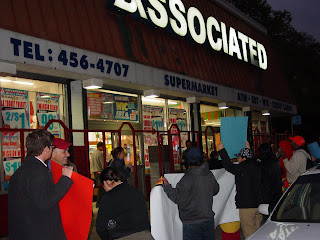 Bushwick- City Room has the story of a long fight to settle a labor dispute with two supermarkets in Bushwick. Almost a year and a half ago, I profiled Make the Road New York's demonstration against an Associated Supermarket branch on Knickerbocker Avenue. The RWDSU was there too. This appeared in the now-defunct Bushwick Courier.

On an early November evening, when the city’s rush hour met the Brooklyn twilight, Nieves Padilla and about twenty volunteers marched under the M train line to the Associated Supermarket at 229 Knickerbocker Avenue. Padilla had organized yet another boycott of the supermarket and this time the volunteers were delivering signed postcards from the community to the store owners Anthony Espinal and Martin Duran.
The postcards demanded that Espinal disburse any unpaid wages and overtime that the supermarket workers are owed and sign a Good Business Community Agreement allowing the workers to decide whether to join a union. Make the Road New York has been leading this campaign for almost three years.
“Sometimes people in front of the store harass us and the owner calls the police,” Padilla said.
“They get upset every time we go there,” Laura Tapia, an organizer with the Retail Wholesale Department Store Union (RWDSU), said. “They say they pay correctly and that the employees argue, but that is incorrect.” 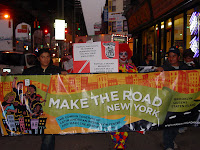 The volunteers made colorful signs that said ‘No more exploitation for the workers!’ in both English and Spanish and carried a large banner down to the supermarket. Many of the demonstrators were Latino, and several only spoke Spanish.
“I’m here today to protest and defend the rights of Hispanics,” Ingred Delgado, a community volunteer, said, as Sara Cullinan, a Make the Road health policy advocate, translated. “This is really important, even on All Saints Day.”
As the demonstrators made their way down Myrtle Avenue, Jose Carangui, a restaurant worker in Manhattan and volunteer organizer with Make the Road, handed out flyers to all the bystanders while the others carried signs and chanted slogans.
“Sometimes I feel like I’m in the middle,” Carangui said. “I serve food to people who spend a thousand dollars on a meal. Then I come to Bushwick to interact with friends and family. They’re struggling with rent with a check of $300 to $400 a week.”
Make the Road New York claims that this particular Associated market pays its workers about $300 a week and that employees are working 50 to 60 hours a week, earning between $5.50 and $6.00 and hour. Minimum wage in New York State is $7.15 an hour. Associated Manager Martin Duran disputes this claim. The New York State Attorney General is currently investigating the matter.
“Some of the cashiers make minimum wage, but many of the employees make conside 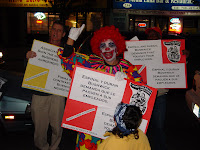 rably more than that,” Duran said. “I give them a few weeks of vacation time as well.”
While Duran did not explain his store branch’s financial situation, Tapia believes that the boycott has hurt their profit margins.
“I believe Associated is losing a lot of money,” Tapia said. “Now they have to put out a lot of sales in order to get more customers. They extend coupons to other areas in order to get more customers.”
On the way to the supermarket, Carangui explained why it has been difficult to mobilize workers and the Latino community in Bushwick.
“Some of them don’t have access to WEAK,” Carangui said. “They feel afraid. I build knowledge of people’s rights, to encourage them to not have fear, and to fight for our rights. Because of immigration, there is a fear of the process. There’s fear over losing one’s job. When you let people know about their civil rights, they become engaged.”
At 6 PM, the demonstrators lined up, facing the red metal bars in front of the Associated Market and chanted several slogans in Spanish. Lourdes Rodriguez, a volunteer organizer who often dresses as a clown during these boycotts, energized the crowd and led chants such as ‘The people, united, will never be defeated’ and ‘Martin, sign the contract and pay the debt.’
“Associated owes $2 million in back wages,” Jeff Eichler, a retail coordinator with the RWDSU, said. “This one owes $1.6 million.”
Padilla is trying to contact Duran to ask for a meeting. Duran is not willing to appear outside and speak with the demonstrators, but he allows the crowd to proceed without any trouble. Meanwhile, a hot dog food vendor slowly rolls his food truck up to the crowd with an eye towards serving the protesters. After a few minutes, he recognizes that no one will buy food from him and then steps into the grocery store.
“I spoke to Martin Duran by phone and I don’t think he’ll be coming out,” Padilla said, hanging up her cell phone. “They told me to do whatever I want. Now the procedure is for someone to go inside, give them the cards, and then we go.”
The task fell to Julian Gonzales, a lawyer with Make the Road, who walked into the store with the box of postcards and dropped it on the customer service counter to the left of the cashier check-out lines.
“I have something to give to you on behalf of the community,” Gonzales said.
“Thank you, but I will be giving this back to you,” the clerk said. He promptly carried the box out of the store and left it near the front entrance.
“Today was successful because a group of the community came to deliver a representation of the community and to boycott the store,” Padilla said. “We don’t want them to close the store or leave the community. We want them to show respect for the workers and for the community. That’s what we’re fighting for. They already know what we want. We fight for justice; for our community because we believe in change”
The next day, after things settled, Duran responded to Make the Road’s boycott.
“We have tried to negotiate with Make the Road but the negotiations have gone nowhere,” Duran said. “I have no complaints with the employees. They’re not boycotting against the store. We’re just waiting for the attorney general to finish the investigation.
As for the postcards, Make the Road organizers took the box back to their Grove Street Headquarters after the boycott.
“We’re going to FedEx it to the store.” Padilla said.

Your blog is very much interesting; I am your blog favorites. I follow your blog.

I have been maintaining this blog for more than a year.

I have got many back links for my blog http://spacestation-shuttle.blogspot.com/ from government sites, org sites, as well as edu sites.

Sites are as follows

So If you could provide me a link to my blog, it will be much more useful for user and young school and college peoples.

Around 10,0000 visitors daily visits my blog. So it will be highly benefited for your sites also.

It would be great pleasure if you can add this link http://spacestation-shuttle.blogspot.com/ in your blog so that it can benefit our visitors.

Hope you would add my blog.

Please respond to me for this mail.

Awaiting for your reply.