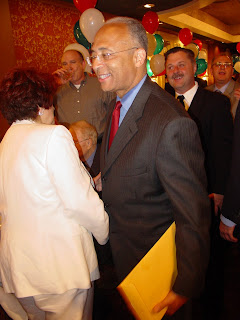 Manhattan- City Comptroller Billy Thompson has received the Working Families Party's endorsement, A Short Story has learned. Thompson, here in Greenpoint at the Seneca Club Dinner, probably needed the endorsement more than Mayor Bloomberg did, and is a sign that Democratic rank and file may be coalescing behind the Comptroller for the Democratic nomination. 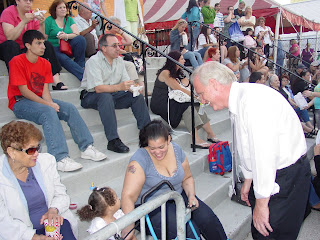 But don't tell Tony Avella that, who visited Williamsburg Thursday night, shaking hands on the corners (Bedford and North 7th) and taking in the Children's Lift at The Giglio Festival. Avella, with "Prop Phil" DePaolo, below, said he would be back for the Giglio Lift on Sunday afternoon and DePaolo promised to bring one more candidate, prospective Public Advocate Norman Siegel, to the corners before petitions are due on Monday. Avella said that if elected, he would not be sworn into office under oath at Peter Luger's, though he did not rule out Bamonte's, which has excellent fresh pasta and vegetarian options as well. Just be sure to make a reservation, Tony! They're busy on the weekends. 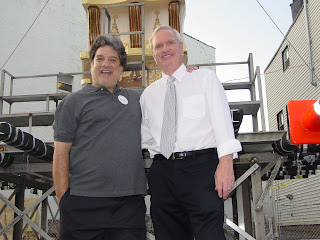 Will the Mayor be making yet another appearance in Williamsburg? More on this and an analysis of the plethora of parks press conferences on Monday.
Posted by Aaron Short at 10:19 AM