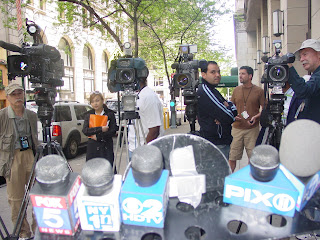 It's a very special version of The Short List this week, as we countdown the hours until tomorrow's Four Square Smackdown between myself and councilmember David Yassky (D-Williamsburg, Greenpoint) live at 1 PM EST from Bedford Avenue. Special thanks to Gregor Nemitz-Ziadie of Williamsburg Walks and Michael Freedman Schnapp of NAG for putting the event together, as well as Community Board One's Ward Dennis who will also be loosing... I mean... facilitating tomorrow's event. 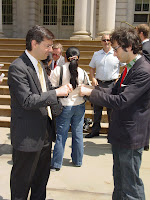 Today is indeed Media Day. Councilmember Yassky and I, right, participated in the official "weigh in" on the steps of City Hall this morning, and took questions about tomorrow's Four Square match from a number of reporters on the scene and through the Internet. David weighed in at a generous 156 lbs, 5'9" while I came in a taught 144 lbs, 5'8". Yeah, how you like that? Las Vegas would not set the odds for tomorrow's event, asking if I were in fact making a prank call (I was not), so I called the oddsmakers at the Aqueduct Racetrack in Ozone Park and they put the line at Yassky +4 minutes 30 seconds. As of this morning the line has been moving briskly and I encourage everyone to take the under. 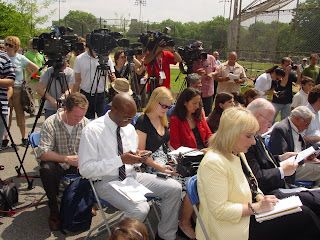 City Hall Press Corps is riveted by the storylines in this weekend's Four Square match.

Let's go to questions. Wait a minute. Where's the Brooklyn Paper? What??? Really!?.... no... really?... Amsterdam? I thought Ben was joking. They're probably smoking a bowl all weekend at ___redacted___. Yes. Reid Pillifant, WG News and Arts, why don't you kick us off.


Q: Do you find your religious faith helps with your game? -Steve Witt Brooklyn Heights Courier Faith is a very personal thing to me.

A: Yes, I attend synagogue regularly and I have also been attending mass at Our Lady of Mount Carmel, St. Peter and St. Paul’s Church and Greenpoint Reformed Church just to cover my bases, but, ironically, Tibetan monks have been known to play games resembling Four Square in order to achieve a measure of inner peace. If only one game of Four Square can bridge the divisions in our community, then it would be all worth it. 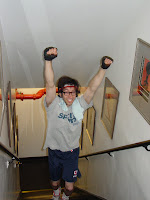 Q: Will there be a supervised urine testing for Performance Enhancing Drugs before this match? -Greg Hanlon, Slate, etc.
A: Yes, I’m being told that Transportation Alternatives members will be administering urine samples before, during and after the Four Square match. I fully support this plan.

Q: Where are you eating pre-game brunch and are mimosas involved? -Jeff Mann, Greenpoint Gazette.
A: I will be dining on homemade granola with yogurt and toast, which I will wash down with the tears of my soon-to-be vanquished opponent.


Q: Aaron I miss yoooouu! -Juliet Linderman, text received 1:57 AM EST from somewhere in South Florida, Greenpoint Gazette.
A: I miss you too, but that's not a Four Square question. 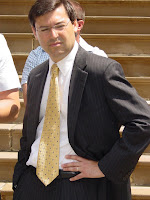 Q: Do you agree with the possible legality of "holdies"? -Linderman, Greenpoint Gazette
A: I support the legality of holdies, as well as tootsies, slam-balls, weiner wankers, double numbchuck forwards, and “The Nydia Velazquez”. However, I have been told by NAG Co-Chair Michael Freedman Schnapp that Treetops of any kind are illegal, due to the high number of glass windows from surrounding first-floor retail establishments.

Q: How much trash-talking do you expect from the Councilman out there? And are you prepared to match him smile for smile? -Pillifant, WGNews+Arts
A: You know, Four Square is a mental game. It can certainly be enhanced by a couple of well-placed taunts, but those are the kind of things that comes up through the flow of the game.


Q: How will you celebrate your victory, and will there be gloating? Tom Tracy- Park Slope Courier 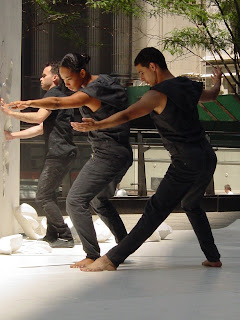 A: While I am dedicating my impending victory to the containment of Leptospirosis as well as the cure of Entitlitis, I am going to prepare an interpretative victory dance, with the help of award-winning choreographer Jonah Bokaer, right. It will be a modernist-style celebration of the triumph of the human spirit.

In other news, and there was a lot this week, The Courier's Gary Buiso takes a Q and A over Superfund, The Courier's Joe Maniscalco checks in with the Coney Island Circus, William Cole of The Brooklyn Rail interviews Ward Dennis over rezoning, Tom (Angotti of The Rail) goes to The Mayor, Bruce Ravitch ate a grilled sirloin at Peter Luger's with a side of swearing an oath of office, and now that the governing crisis that afflicted the State Senate appears to finally be subsiding BHB's Sarah Portlock notes that Dan Squadron is getting married. Guys, remember, you can't use that "Sorry honey, the State Senate is in chaos, we have to postpone!" excuse very often. You don't want to abuse it.