My Summer with Vito 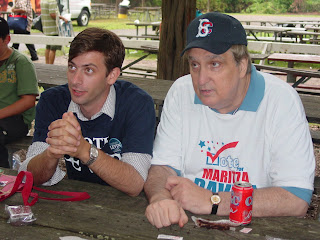 What’s your idea of a perfect summer’s day? Is it a rooftop soiree in Bushwick? An outdoor concert on the East River in Williamsburg? Or possibly a long bicycle ride down Ocean Avenue to Coney Island?
For Assemblyman Vito J. Lopez, it’s a picnic with thousands of Brooklyn seniors, hundreds of volunteers, and every candidate for office endorsed by the Kings County Democratic Party.
Naturally, when I heard that Lopez and the Ridgewood Bushwick Senior Citizens Council were throwing their summer picnic for Brooklyn’s seniors at Sunken Meadows State Park in Long Island (the 37th annual!), I had to attend. It is about an hour’s drive on the Long Island Expressway to the North Shore. I missed my chance to hitch a ride with the Los Sures Senior Center in Williamsburg Thursday morning, so I called Jeff Mann, publisher of the Greenpoint Gazette, to see if he was up for the afternoon drive.
“Oh, dude, I totally forgot about that,” said Mann. “Meet me in Greenpoint at 12:30, but we gotta be back by 3:30, 4 at the latest. I have a date tonight.” 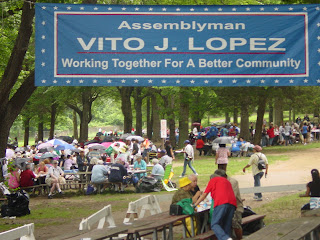 Sunken Meadows is a big place and the seniors were in Field 4, a large hill with dozens of picnic tables. Fifteen buses lined the western edge of the parking lot and a large blue banner hanging from the trees read “Assemblyman Vito J Lopez. Working Together for a Better Community.” 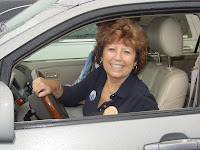 We found it.
Once we got out of the car, I encountered a small group of “Yassky for Comptroller” volunteers as well as the unabashedly charming Harriet Yassky, Councilmember David Yassky’s 67-year old mother, right. I’m going to nickname her “The Momptroller” if David can pull this off. 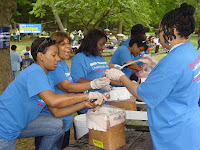 At the edge of the campgrounds, we passed a crew of eight “Thompson for Mayor” volunteers scooping chocolate ice cream out of a cardboard box for a line of patient seniors. After taking a left at the “Eric Adams for State Senator” banner, we ran into Assemblyman Hakeem Jeffries, who, if you believe the rumors, is contemplating a primary challenge against Brooklyn Congressman Ed Towns.
I spotted the Dilans — that’s State Senator Martin Malave Dilan and his son, 37th District Councilmember Erik Martin Dilan — a few feet from a grill station. Senator Dilan is Chair of the Transportation Committee, which tried to handle the MTA’s financial crisis this year. Councilmember Dilan is Chair of the Housing Committee, which couldn’t stop the Rent Guidelines Board from raising regulated rents again. That's not fair. 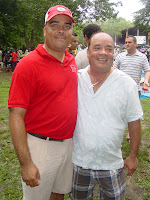 The Dilans are among the most reliable contributors to the Ridgewood Bushwick Senior Citizens Council, both of whom have allocated tens of thousands of dollars to the nonprofit, along with Councilmembers Lou Fiddler, Alison Crowley, Diana Reyna (last year) and Speaker Christine Quinn (last year) for senior services and youth and community development programs. For the 2009 Fiscal Year, Councilmember Dilan secured $202,000 in senior and youth services, with Quinn adding another $150,000 and Reyna chipping in $278,214, though Reyna hasn’t attended this picnic since 2005. This year, Councilmember Dilan set aside $20,000 for the Sunken Meadows senior picnic alone through DFTA (Department of Aging). And Marty Dilan? This year, he allocated $125,000 to offset costs for the picnic. Needless to say, if you liked the food, you should have thank the Dilans. The skies opened up and the rain began to fall over the campground. Seniors scattered toward the buses like a school of minnows… only much more slowly. A flock of Maritza Dávila campaign volunteers passed through, chanting “Ma-RIT-za! Da-VI-la!” led by the council candidate herself. They didn’t stay to chat.

I was ready to leave, but Jeff spotted the head table where Assemblyman Lopez was sitting with 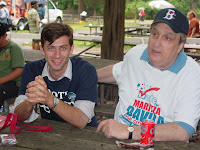 his long-time girlfriend Angela Battaglia, RBSCC Director of Housing, several members of his district staff, and Steve Levin, Lopez’s Chief of Staff, who is running for Yassky’s City Council seat, was nearby. Both Battaglia and Lopez wore Brooklyn Cyclones hats and white “Davila for Council” t-shirts and Steve had his own shirt advertising his candidacy. Steve looked nervous. He looked like he had just been ordered to disable an IED, but he sat down next to Vito anyway.
“So my interns tell me there’s this Brooklyn reporter who happens to be on Diana’s payroll and has been handing out flyers with her volunteers. You don’t happen to know anything about that, do you?”
Nice to see you, too, Vito.
It turns out Vito was in a good mood and he wanted to talk about Steve and Maritza’s chances in their Council races. I didn’t say very much, but Jeff kept the conversation moving and Vito had rapid-fire responses for everything, roughly paraphrased here: 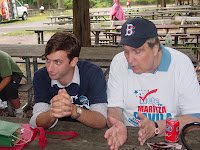 on 4,000 doors in the district in 2001 and Steve said he will knock on 4,000, but I think he’ll be short. Knowing Steve, if he loses, he’ll blame it on not knocking on that 4000th door.
On Levin’s chances for winning: He picked up two big endorsements (DC 37 and the United Federation for Teachers) and is getting the New York League of Conservation Voters this week. He’s got 2100 teachers in downtown Brooklyn. Endorsements from Women age 40 to 70 love him. They invite him into their homes for coffee, ask if he’s single. He has that photo of him with his cat. We should have sent out a mailing with it.
On Maritza’s chances for winning: It’s tough running against a two-term incumbent, but Maritza has support from 8 unions. Did you see those videos and that article in the Queens Ledger two weeks ago? Diana saying that 13 million people live in Brooklyn when 1.3 million do and the people at Crain’s were correcting her, helping her through the debate?
On why they haven’t emphasized Diana’s term-limits vote and her record on the rezoning: We will. It’s a long race.
On Yassky bringing his mother to the event: That was a smart move. She’s a campaigner.
On the Comptroller and Public Advocate races: I’m backing Yassky and De Blasio and I think they will force run offs (this was before De Blasio’s ballot was challenged).
On Council candidate Jo Anne Simon, one of Levin’s main opponents: “I like her a lot but she leaves people cold. I don’t like the way she looks.”
(I’m not sure if this is a backhanded compliment or a front-handed insult. I’m going with the latter.)
On the event itself: We had 4,000 seniors, 350 volunteers, steak lunch and chicken dinners on five grills. Union guys were working on backup grills to give the volunteers a rest. Every bus was filled even though the seniors knew it could rain.
On Yankee Stadium: I went to the Yankee game in the new stadium last week. It was 1-1 and I was falling asleep before Matsui hit that homer. The stadium is beautiful.
On the Yankees-Red Sox rivalry: My staff bought Dilan’s wife, who is a Red Sox fan, little Yankee gear for their eight-month old. She can’t say no to that.
On why so many Democrats signed on for a bridge repair bill at Sunken Meadows even though the park was in a Republican Assemblymember’s district: This has been a Democratic hangout for years. Because if they don’t build the bridge, we can’t get to the water.
On the New Jersey corruption scandal: I haven’t heard anything about that. We don’t get cell phone reception or the radio up here.
It was 3:30 PM. The rain steadily came down and we were getting soaked. Vito said goodbye and we headed for the car. Jeff and I went over the conversation in the car for a while.
“That was worth the trip, right?” I said.
“Eh, I had nothing better to do,” Jeff said.

Did the Dilan's offer you a beer?

Did you get a steak?

What, the Bishop wasn't there?