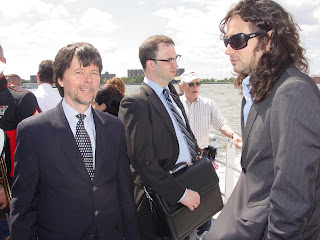 "You know, Constantine, a 10-part PBS series on the Origins of Rap would be a great idea!"
When I woke up Saturday morning in Bushwick, I didn't think I would be sharing a ferry with Award-winning Documentary Filmmaker and public television heartthrob icon Ken Burns, some dude from American Idol, right, and a 36-piece marine corps band, but there I was, entangled in another small adventure. 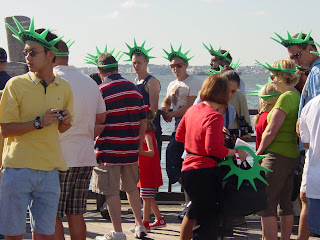 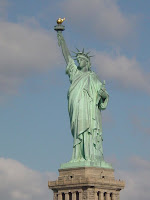 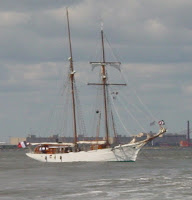 Michael Bloomberg, Interior Secretary Ken Salazar, Governors David Paterson and Jon Corzine, the French ambassador, man-of-the-hour Congressman Anthony Weiner, and a national press corps in tow is something altogether different. Of course, I arrived late and had to take the 8:30 AM ferry with... ugh... the public. Why couldn't I have hitched a ride with the French ambassador Pierre Vimont and his schooner? 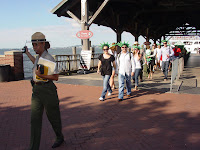 Fortunately, I arrived just in time for the ribbon cutting, jumping in front of a group of thirty tourists who had been selected for the very first trip up to the crown. You could tell who they were because they were wearing sea-foam crown hats that looked like something that gets handed out at a New York Liberty game. I nudged my way through a crowd of 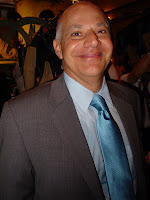 photographers to stand next to a sharply dressed french gentleman who I mistook for the ambassador. He was the French Counsulate General and his name was Guy. Of course it was. I asked him whether France would be interested in repurchasing the Statue since our country's Treasury Department is in a bit of a bind these days. He said, "non!" it was a gift! Maybe the feds can look into writing it off on next year's 1040.

Guy said that the ambassador was heading back to Washington for another celebration later that afternoon and they just took the schooner out from Brooklyn to Liberty Island. The vessel is part of a race and has been participating in several legs of the challenge which will pass through Bermuda and Ireland, but was off today. Somehow, I don't think it's the same boat that Doug Biviano used to sail around the world. Minutes before the ribbon cutting, Governor David Paterson slipped by my right side and walked up to join the dignitaries. Jeez, anything to get out of Albany. "Poor guy," said Guy. 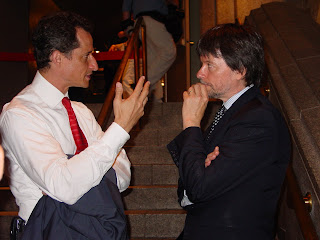 "What do you think? Six-part doc series. Weiner: The Man. The Myth. The Mensch!"
"I don't know, Anthony..."
"We could go docu-style drama. Bob Saget confirmed his availability!" 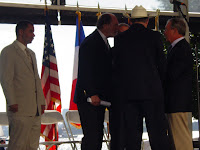 The ribbon cutting ended and we moved outside for an official welcoming ceremony hosted by Ken Burns. Yes, that Ken Burns. Everyone gets to talk but the electeds are surprisingly brief.
The best lines of the morning come from the rival Governors when Paterson says "I'm pleased to visit (Governor Corzine) in New Jersey but I do believe we're on New York's land. Governor we don't need any more statutory problems," and Corzine responded, "Don't fall off the boat on your way back because you're in New Jersey waters." A small child pointed toward Gov. Paterson and I bet he was thinking, "Look! It's the man from SNL!" 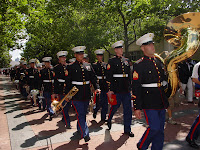 A marine corps band from Albany was on the scene too, playing a number of songs I recognized from high school, but significantly better than how we sounded. Perhaps it was because the horn section was sober. They were also sweating heavily. Big ups to Sergeant Audrey Tolson, a rifleman who handles the M-16 A-2 service rifle, but she didn't have one on her today because National Parks Security wouldn't have let her in. I asked Sgt. Audrey whether they had a particular song they played whenever the State Senate undergoes a coup. Puzzled looks.
"Oh, we're out of Albany, Georgia," said Sgt. Audrey. I'm an idiot.

Walking back to the ferry with Congressman Weiner, I felt a bit nostalgic. 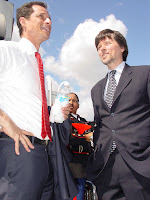 "When was the last time you were here?" Weiner asked.
"Fifteen years ago," I said. "I went with my dad."
"You must have been 8 or 9 then," Weiner said.
I was. I remember climbing two winding staircases, leading to a small, cramped metal staircase to get to the Statue's head. It was tiny, not quite the size of my Brooklyn studio, but pretty damn close. I think everyone on the boats, ferries, schooners felt a little nostalgic that morning. Either that or it was hunger pains. Weiner didn't even get to try a slice of birthday cake baked just for the occasion of our nation's birth. His staffers didn't either. They were up at 4:30 in the morning on Saturday for this event, and Weiner's not even running for mayor anymore. So, for Angie and the rest, I'm dedicating a tune and sending it out through the blogosphere, just for you.

Just as I stepped off the ferry, thinking my day of surprise encounters was over, I turn around and find myself staring face-to-face with a man in a baseball cap.
"Hi! How are you!" said Parks Commissioner Adrian Benepe.
Wow! Always fun to see the Parks Commish, even if we were on federal property. I asked him why the fireworks were on the Hudson River instead of the East River this year.
"It's the 400th anniversary of the Hudson. That's why they moved it and we hope they move it back to the East River," said Benepe.
Well put. Happy Fourth of July weekend everyone!

My camera ran out of battery power at this point, so we'll go with this file photo of Commissioner Benepe, left.
Posted by Aaron Short at 9:04 PM