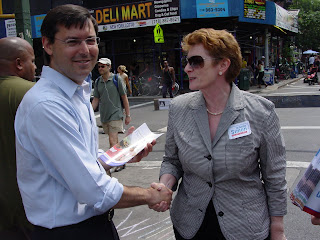 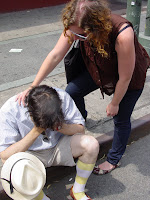 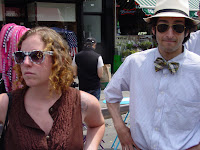 Williamsburg- A cool breeze that blew through the canyon of Bedford Avenue late Saturday afternoon did little to chill the heated expectations that had been developing over the past week, as Councilmember David Yassky (D-Williamsburg, Greenpoint, Brooklyn Heights) eliminated local journalist Aaron Short in a five-hour Four Square match, held during the duration of Williamsburg Walks.
"The ball just didn't bounce my way today," said Short. "I don't know what happened. It was all a blur." 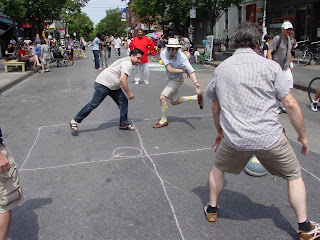 Despite the support of a bevy of reporters and local residents including Greenpoint Gazette's Juliet Linderman, WG News and Arts' Reid Pillifant, and Churches United's Rob Solano, who had $20 on the game, Short let the ball slip through his grasp as Yassky took hold of the Ace square after Short's crucial unforced error in the midpoint of the match. Yassky then finished off Short, teaming up with Council Candidate Jo Anne Simon, who kept him out of the Ace square, eliminating any chance of a comeback. Short never recovered. 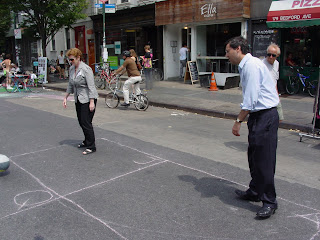 "Too many unforced errors today," said Short, weeping slightly on the curb of Bedford Avenue. "I let the dogs in McCarren Park down, I let Rob Solano down. I let my entire community down."
"Goddamnit Short," said Solano, walking away in disgust. 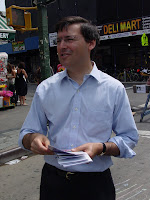 At 1:40 PM, Yassky entered the game with little fanfare, methodically tapping easy rallies into the Queen and King squares before striking low balls towards his opponents' legs and advancing to the Ace. It was a strategy of lowered expectations, lulling his opponents to sleep, that served him well in the contest. Will he employ the same strategy in his citywide Comptroller race? Only time will tell. For David, the beat bounces on.
"Hi, my name is David Yassky and I'm running for Comptroller," said Yassky, shortly after the match, as he distributed flyers touting his candidacy.

"I still can't believe I lost to this guy," said Short.

Not so for Short, who immediately announced his re-retirement from the game after the match. Short had no comment and referred all additional questions to New England Patriots Coach Bill Belichick, who held a press conference nearby to give his analysis of the contest.
Posted by Aaron Short at 11:06 AM

aw keep your chin up... maybe you will get him next time Arron..

What's sad is David Yassky's record of selling out Williamsburg.