Nice call by Greg Hanlon. The resemblance here is uncanny...

Books of The Times

Taking a Swing at Baseball’s Hall of Fame (and Infamy)
By CHARLES McGRATH
Published: July 28, 2009
Over the years the Baseball Hall of Fame, the shrine in Cooperstown, N.Y., that held its annual induction ceremony on Sunday, has been so fraught with controversies about who deserves admission and who doesn’t that Red Smith, the great sports columnist, once wrote that the only solution was to blow up the place and start over.
Jim Rice giving his induction speech on Sunday. It took him 15 years to get in, perhaps because he was aloof from writers.
In his new book, “Cooperstown Confidential: Heroes, Rogues and the Inside Story of the 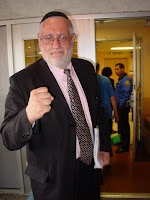 Baseball Hall of Fame,” Zev Chafets suggests that part of the problem is that the whole institution is built on a foundation of deceit: a falsified creation myth that asserts, all evidence to the contrary, that our national pastime was first played on the bucolic pastures of Cooperstown and that a leathery, rag-stuffed orb bought from a local farmer for $5 might be the game’s Holy Grail, the very first baseball.
Posted by Aaron Short at 2:59 PM