John and David on the Corners


Well, no, it didn't play out that way, but Councilmember’s and City Comptroller candidates John Liu and David Yassky spent much of the morning flagging down registered Democrats on the corners of Bedford and North 7th Streets, on their way to their morning commute. Volunteers from both camps hoped to rack up signatures for petitions before the quiet July 4th holiday weekend. 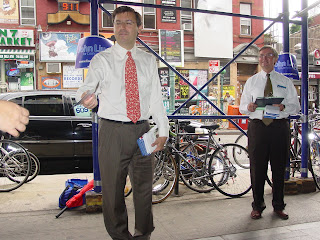 "Hi my name is David Yassky. Thank you soooooooooooooooo much for signing my petition."

Now, it's a small city, and sometimes the candidates do cross paths in City Hall, at events like the 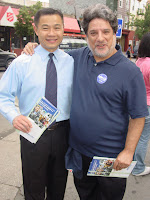 Seneca Club or the Kings County Annual Dinner, or even a Bruce Springsteen concert or two, but the dueling campaign activities in Williamsburg struck me as a little odd. Blame (or credit) Phil DePaolo for this one. He has been planning to bring Liu around the city for petitioning events after his New York Community Council endorsed Liu in the race.
"I knew as soon as I sent the alert out that David was going to show up. Apparently David was calling the (Community Board) office yesterday, letting them know he was going to be here," Phil told me.

From 8 AM to 9:30, both candidates passed out flyers to commuters while their volunteers collected signatures for petitions. Williamsburg Park Mom Katie Naplatarski was one of the Yassky volunteers with the green sheets, and we hear Ward Dennis, Peter Gillespie , and Stephanie Thayer stopped by to sign it. Across the street, Phil and CBID's Lucy Koteen roped in their share as well, as Heather Roslund came by shortly after 9 to sign John Liu's petition. 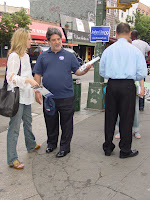 (Correction Updated: Ward Dennis said that he did not actually sign the petition and that he and Peter were heading to a NAG meeting. I put a call into the Yassky campaign to clarify.)
"I won't sign anything for David, gimmie that!" said Heather.

It's been a tense race so far, and each candidate has raised well over $1 million, with John reporting
$2.874 million, followed by Melinda Katz ($2.188) and David Weprin ($1.628). David has raised the least, at $1.425 million, though many political observers believe he has a strong chance of winning the race and he is hoping to receive endorsements from major papers, including the New York Times. In Williamsburg , however, Yassky encountered a slightly rockier reception, as evidenced by this exchange.

David: Hi, my name is David Yassky and I'm running for City Comptroller.
Woman: Did you vote for a 3rd term?
David: No, I'm not running for a 3rd term.
Woman: But you voted to extend term limits.
David: Yes, I did...
Woman: It's a terrible idea...
David: Well, I disagree with you...
Woman: ...and I hope it comes back to haunt you.
David: Shrugs meekly. Well...
At 9:30, Phil DePaolo shook John's hand and sent him off. They'll do it again in the East Village and the Lower East Side in the coming weeks. I asked John what his plans were for the Fourth and if he will be participating in Nathan's hot dog eating contest at Coney Island . 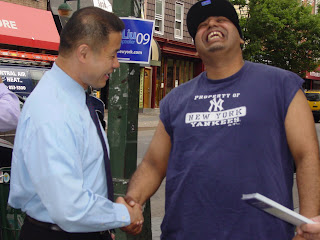 "I'll be eating my share of hot dogs this weekend, but it's hard to imagine putting 50 hot dogs in my mouth," said John.
Posted by Aaron Short at 4:44 PM

Couldn't happen to a nicer person. Anyone care to place bets as to which developer Mr. Yassky will work for after he is finally, at long last, removed from public office?

David Yassky has a lot of nerve showing up on the Northside after completely selling out that community during the 2005 rezoning.
His record of double talk is astounding, even for a politician.
And I won't even mention how Yassky thought he knew better than the Landmark Preservation Commission regarding saving certain buildings in Williamsburg.

DAMN! I was going say Two Trees. Okay, I'll go with Toll Brothers in light of Mr. Yassky's "position" on Superfunding the Gowanus Canal (against).

Yassky thinks The Times will endorse him? Hilarious. He also thought he would be elected to Congress. Of course he wasn't. What a fool.

What amuses me is this is the person who said of 184 Kent Avenue:

"This is simply not worthy of landmarking."

And now he's shilling a mural on India Street. Since when has Mr. Yassky become an aesthete? Oh, wait: this mural will be torn down in a couple years to build a FORTY STORY TOWER.

as a teacher of the Alexander Technique, all I can say is don't trust a man whose head is lower than his shoulders, and that Mr. Yassky is very "twisted."

I understand the idea of candidates going out in the morning to glad-hand people, quick handshakes, handing out pamphlets. But you want me to STOP AND TALK TO YOU on my way to the L train? Are you KIDDING?

There is a way to judge body language. I am sure there are people who had plenty of time and were happy to stop and talk, but if someone is clearly hurrying, LEAVE THEM ALONE. What is going to make you believe that your intrusion is warranted?

This technique alone assured me that I wouldn't consider voting for him again, along with the myriad other reasons.

There's an ass in Yassky.

I posted this on Heather's blog. Maybe it's just the journalist in me but I think things like "We hear X,Y, and Z stopped by to sign it" is not good practice. If you don't know for sure, don't publish it.

Right Mikki. When I say "we hear" in a blog, that's a shorthand style for, yeah, that's confirmed from a couple of sources. Ward is now saying he just stopped by to say hi. We could call over to the Yassky campaign and ask them to send the signatures over. I could be wrong, but maybe that's the journalist in me too. Thanks for reading!