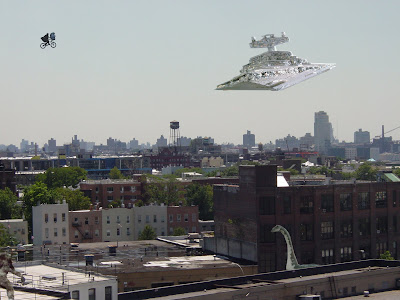 My apologies for the lateness of this week (edit: Last week's) short list, but I was briefly abducted (abdicated) by my responsibilities. Now, about those aliens...

About a month ago, an artist named Tina DeRamus noticed a small moving object reflecting in the sky above her backyard and began taking video of it. The result is below:

A small, baseball-like unidentified flying object appeared to be hurtling unevenly above Williamsburg. She has shot several videos since then, including this one, which shows a better view of the UFO.
Needless to say, a small media-led onslaught has followed, including posts by Freewilliamsburg.com, Gothamist, Vosizneias, McBrooklyn, and even wpix channel 11.

A little later, I went back to get comments from the Borough President and Community Board 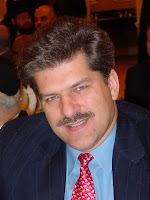 1's Mieszko Kalita, who as public safety chair, would likely be responsible for any public safety concerns that the UFO and any of its intergalactic passengers would bring to Williamsburg.

At this point, the news spiraled back on itself, with Free Williamsburg posting reports of a post they already posted, and the Jewish blogs began celebrating ET's arrival in Holy Williamsburg just in time to celebrate Purim . So far, no one has been able to identify what it was exactly that Ms. DeRamus filmed. To me, it looks like a meteorite or one of those satellites that Major League Baseball put up to help us forget about the steroids scandal. Perhaps they're just looking for a relatively inexpensive 2-Bedroom apartment for between $1200 and $1400 a few blocks from the waterfront, just like everyone else.
Posted by Aaron Short at 4:22 PM