Pour Some Sugar on The Land Use Committeeeeeee... 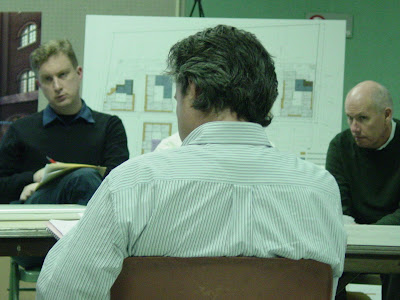 Like cold delivery pizza that arrives more than thirty minutes after it was ordered, Community Board 1’s Land Use Committee sent the New Domino project back to the developers with its recommendations. 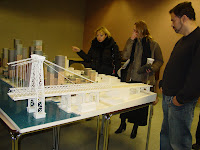 After a presentation that lasted about an hour, another ninety minutes of questioning followed, led by Land Use Chair Ward Dennis, above. Several members of the community sat patiently off to the side, waiting their turn to speak, but the meeting was open to quesitoning from board members only.
The objections were numerous. From the sheer density of the site, to the number (1,694) and cost ($50,000 each!) of parking spaces, to the effect of 5,000 to 6,000 new residents on local roads, buses and the L-train and JMZ-train subway stations nearby, to the homeownership component of affordable units and senior housing. There was also a lot of side chatter, even more than usual at a Land Use Committee meeting. 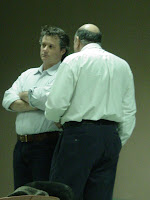 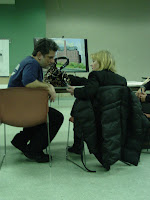 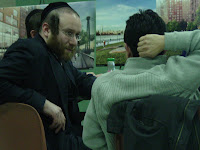 There were also two key absences: Rabbi David Niederman and Msgr. Joseph Calise. Both of whom had prior committments, but some Domino supporters think they may be more sympathetic to the affordable housing arguments than the rest of the Land Use Committee. Anyway, there are lots of quotes to choose from, so let's go to the excerpts:
Del Teague: I think this is massive, I don’t understand how the neighborhood is going to absorb this influx without some commitment form the city to do something. What’s happening now is going to effect the community for years and years to come. My concern is that 15 years down the road, we’re going to be looked at as imbeciles for selling out this community.
Ward Dennis: Their intentions are good, anything can change, markets can change.
We’re approving the zoning, we’re not approving a really nice design.
More Ward: Density, I don’t know where this goes. It seems to me, it’s a privately owned site, residential, the question is at what scale, what density. We had a 3.7 density years ago. We lost that battle completely. The model going forward is 4.7 upriver or 5.0 downriver.
Susan Pollock: New York’s economy always comes back strong and it always comes back stronger than before. EDC is predicting more growth in the future for Williamsburg and we believe this site will become a destination. Its not going to sit fallow forever. Real estate works in cycles. I have full confidence that the site will be built.
and finally, Heather...
Heather Roslund: This is the future of New York City? It’s so sad. We should shoot ourselves right now.
Meanwhile, Press Row began thinking of catchy headlines to best capture the committee vote. The following were rejected:
Good and Plenty: Domino's Density Concerns Board
Sugar Dissolve
Burnt Sugar
Not so Sweet
Candyland Roadblock
and of course, Domino: Just Shoot Ourselves Right Now
The Brooklyn Paper used DominNO and my paper went with Sugar Shock. Gothamist did not have a silly title and neither did Brownstoner. 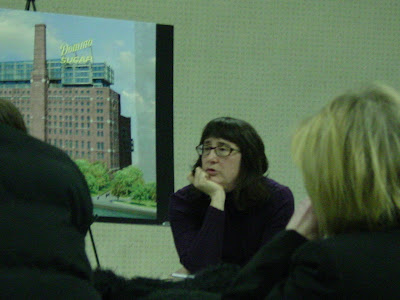 For Susan Pollock, who has likely spent the past day sifting through the coverage, there's a bright spot in all this. She could use a little Def Leppard to get her through the rest of the day.
Posted by Aaron Short at 12:00 PM

I hope the CB1 land use committee finally "gets it" on the parking issue and the massive impacts of all that parking on the surrounding community.