No it's not a new spinoff of SyFy's Warehouse 13, where government agents noticed that supernatural objects were being stored under a Williamsburg condominium building by the developers, which led to further investigations into supernatural activity in North Brooklyn... 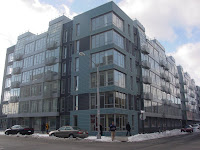 It's just a plain old 120-unit new development in Williamsburg's northside that was close to foreclosure. Earlier this month, a bankruptcy court judge initially refused to extend a deadline involving the developers and Capital One Bank, after the developers offered to purchase the building's debt for $30 million (they defaulted on a $50 million mortgage last summer).
The Gowanus Lounge nicknamed the site the Roebling Oil Field back in the day and a bevy of blogs, Crains, The Real Deal, Curbed, Brownstoner, etc. (and the Times Real Estate section), have been commenting on this for a while.
Now it looks like a tentative deal is in place for the developers (Isack Rosenberg of Rose Plaza/ Certified Lumber fame and Yitzchok Schwartz) to purchase the debt from the bank, after an all-day conference on February 17. They're due in court again on March 2 to hammer out the details. Tracking...
Posted by Aaron Short at 12:21 PM