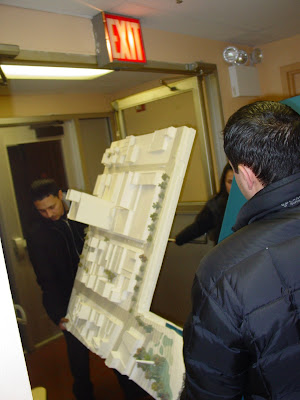 As Community Board 1 bids farewell to the New Domino scale model, let's take a few moments to 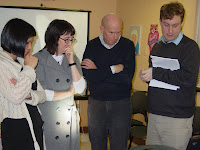 1. Assemblymembers Joe Lentol and Vito Lopez, who did not send representatives last night, nevertheless had their reflections on the project read into the public record by a local resident who spoke against the project. I've never seen that happen before. Their district offices are closed today, so we will have to wait to get their official statements on their specific objections to the project.

2. Council member Steve Levin's office indicated they are still evaluating the proposal and have not come out with a statement in favor or against Domino. Levin's new legislative policy expert Ashley Thompson, poached from Melinda Katz's office where she concentrated on land use issues, was present for the entire meeting last night and was dilligently taking notes. 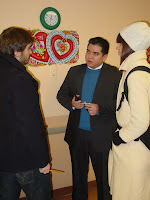 3. The most underreported story of the night was the official reunion of Churches United and Churches United for Fair Housing. According to Rob Solano, it was a long time coming. I am not sure what this means structurally for both organizations, or whether Churches United will continue to exist as it is currently formed, but both the Catholic clusters and the rank and file parisioner activists in Williamsburg are strongly in favor of the Domino plan.

4. The second most underreported story is the silence/ relative ambivalence of the Hasidic community (and Rabbi David Niederman) on New Domino. I know CPC Resources has reached out to many South Side community groups during this process, but I don't know how much they have met with the United Jewish Organizations. For the Broadway Triangle and Rose Plaza, Hasidic members of CB1 asked lots of questions. Only Yehuda Turner had a question last night. Expect more at the Land Use meeting on February 23rd.

5. NAG laid out its arguments early in the public session, best encapsulated by board member Emily Gallagher. But Transportation Working Group Chair's Lacey 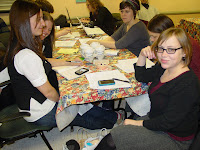 Tauber's arguments were pointed, specific and were not addressed last night by CPC. Transportation issues could well frame the debate over development near the Williamsburg Bridge.

6. I wrote that OSA's Julia Morrow said that Transmitter Park in Greenpoint was open. She also added that the park was currently out for bid. The park is in its raw stages and it will not look like it does now in the future.

7. For people wondering what was up with all the baseball references in Father Rick Beuther's speech, I have been told by a parishioner that this is typical. Apparently Beuther is a giant Yankees fan (more of a Jeter guy than an A-Rod guy) and that he dumps lots of Yankees references in his sermons during Sunday mass. I wonder what he thinks about the 5th starter debate? 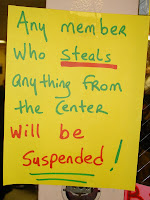 8. Juliet Linderman is back from Costa Rica and they're putting their paper together tonight. Also, the Jeff Mann engagement watch is over. Congratulations Jeff! More on this later.


9. Does anyone think this sign greeting Swinging Sixties seniors is a little harsh?


10. Finally, can anyone tell me what gesture Phil DePaolo is making below and who is he doing it to? My vote goes to, 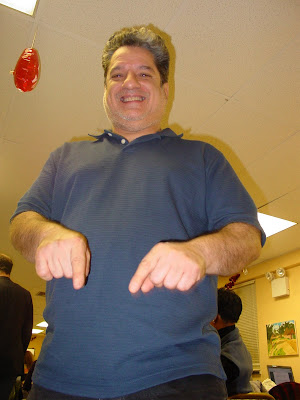 If you think that sign was bad, you missed the one in the Ladies Room. Seems there's a paper towel and toilet paper thief lurking in the shadows of Ainslee Street.

I should add that a representative from Vito Lopez's office was in fact at the meeting on Tuesday, but they did not read a statement.