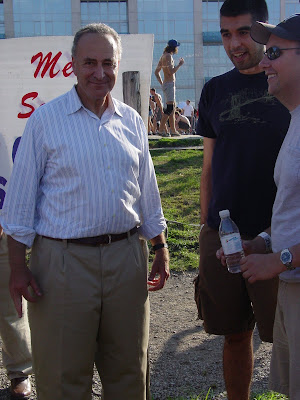 Senator Chuck saw his shadow which means the Jelly Pool Parties are returning to the East River.

By now, you've heard that the pool parties are returning in 2010 which will feature 8 free concerts. Senator Schumer's office sent out a release yesterday where everyone thanked everyone else for saving the concerts.

“Summer in Brooklyn without the free JELLY Pool Parties simply would not have been the same and I am beyond thrilled to see that they will return in 2010,” Schumer said. “I have truly been inspired and energized by the enthusiasm behind these outstanding concerts and am proud to have worked so hard on behalf of concert-goers everywhere to see that they return. I’d like to thank OSA, NYS Parks, NYC Parks, Borough President Marty Markowitz, Assemblyman Joe Lentol, Senator Daniel Squadron and Councilman Stephen Levin for working so hard to see that the Pool Parties return in 2010. I can’t wait to ride my bike this summer to the East River State Park to rock out at these concerts once again.”

A cursory look behind the story has revealed some grumbling between the parties involved, though surprisingly it did not come from an originally reluctant State Parks office, which had not been involved with a project of this scale in Brooklyn before and had concerns about security and liability.
Instead, Jelly and the Open Space Alliance had differences regarding fee structures, liability issues, and other costs, and the delays in negotiating a deal seemed to frustrate OSA's board which wanted to have ticketed shows in the park.
At this point, with a memorandum of understanding in place, the groups are trying to resolve their differences and move forward with what will likely be an exciting concert season and expanded use of the Wiliamsburg waterfront.
Posted by Aaron Short at 12:06 PM