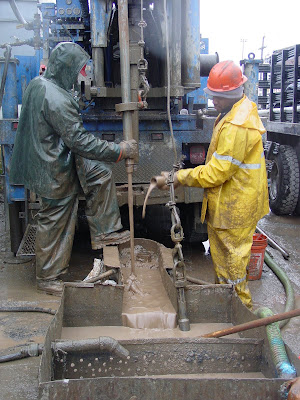 One of my favorite photos. It was pouring that day and I ruined a pair of shoes. Still worth it.
The Meeker Avenue Plumes, though not as well known as the Greenpoint Oil Spill or the sediment contamination in Newtown Creek, will be in the news a lot in the next couple of weeks now that two major studies (National Academy of Sciences and the University of Albany) were released about PCE or PERC, also known as tetrachloroethylene, which is a chlorinated solvent primarily found in industrial strength dry cleaning companies, have backed the EPA's classification that PERC is human carcinogen. Turns out the chemical is more carcinogenic than was previously thought and was correlated to elevated rates of kidney cancer.
Also, this winter DEC workers and geologists found a sample of pure product (73 percent pure) of PERC on Norman and Kingsland in East Greenpoint. The photo above, taken last winter, is not far from this site. DEC Project Manager David Harrington described encountering the sample during a public forum at St. Cecelia's auditorum:
“We got hit in the face with it before we got our gear on,” said Harrington. “It smelled like white-out times a thousand with a lot of sugar thrown in for a couple of seconds until my nasal lining burned out. That’s pure product. If you smell something like that, that’s when you know you’ve got the good stuff.” 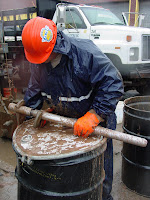 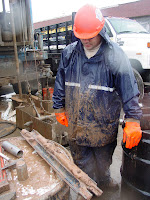 Department of Health officials have been encouraging home owners and property owners to have their residences tested and mitigated as necessary. The big question over the next month, at least the one being driven by New York environmental activists, is that the DOH's standards for toxicity for mitigation are lower than the EPA's numbers, meaning that more homes could fall into the mitigation category if the stricter levels of toxicity are enforced. The Newtown Creek Alliance explains some of their Meeker Plumes suggestions in an online memo released last year. Here are the two key points:
Should work to revise the New York State air guideline for PCE of 100 mcg/m³. DOH's PCE-in-indoor-air guideline is 250 times higher than U.S. EPA's Regional Screening Level of .41 micrograms per cubic meter.
Should work to revise the New York State air guideline for TCE of 5.0 mcg/m³. DOH's TCE-in-indoor-air guideline is two orders of magnitude higher than the most protective risk-based concentrations for TCE in air developed by California, Colorado, New Jersey and several EPA regional offices, which range from 0.016 to 0.02
For more information about the plumes and to get your home tested, or if you have health related questions, call the New York State Department of Health at 1-800-458-1158, extension 2-7860.
Posted by Aaron Short at 12:11 PM

Thanks for covering this critically important environmental health issue Aaron!

Appreciate your help getting the word out to the community!