Community Board 1: Live From Sugarland! Part I


Churches United hopes to be Settlin' in New Domino very soon.
6:01 PM: People are rushing into the Swinging Sixties Senior Center (211 Ainslie Street) with such ferocity you'd think they were giving away Medicaid. Inside, there is a long line of people to sign up to speak during tonight's public session which involves the public unveiling of CPC Resources' New Domino plan. 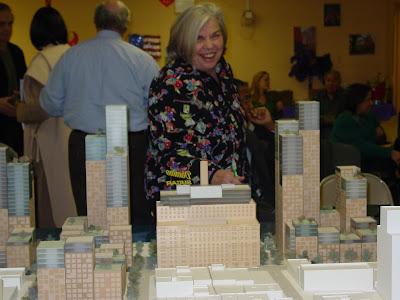 In the middle of the room is a giant scale model of the 11.2 acre South Side development project, which consists of 2200 units, 660 units of affordable housing, (with a 50 percent CB1 preference) and 105,000 sq ft of community space. 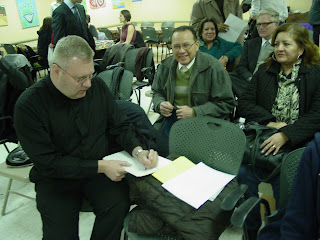 Also, it appears to be a Churches United reunion tonight. Father Rick Beuther, above, has a front row seat and he's sitting next to Juan Ramos and Anita Dunbar from the Broadway Triangle Community Coalition. CB 1 board member Rob Solano, who is wearing a robin's egg blue sweater, is nearby too, which is an upgrade from his usual mortician look. Another priest walks in and I notice Monsignor Joseph Calise. Let's go by the numbers. Priests: 3. Documentary filmmakers: 4. 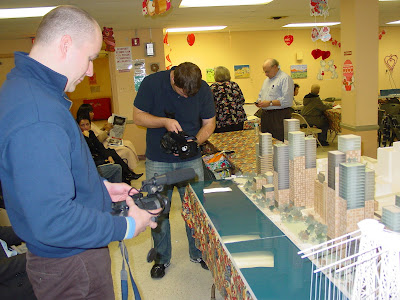 Richard Edmonds from Linden Alschuler and Kaplan says tonight is going to be a long one. He's passing out fact sheets on "the new Domino". 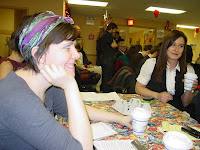 I notice that the NAG girls are sitting at the press table and instead of shooing them away, we agree to split the table as long as I can keep four seats reserved for press members. NAG's Lacey Tauber shows up 3 minutes past the sign up deadline, out of breath and out of luck. Sorry Lacey. More NAG facts. Did you know that Emily Gallagher and OSA all-star Julia Morrow are on the same Gutter Bowling League. The team name? "###s Ahoy!" says Morrow.

6:19 PM Council candidate Ken Baer has just walked in. This should be interesting. He's here to talk about New York's Horizontal Hydrofracking. I'm not making that up. Emily explains that this Also, I'm being told that Marie is keeping attendance at the door and they will lock this down once they reach capacity. Fortunately, a very red Juliet Linderman makes the cut and sits down at press row next to me.
I represent the evil developer," said Edmonds who dropped a fact sheet on the table. 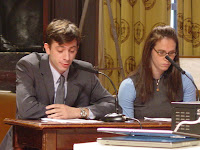 6:32 PM Chairman Chris starts the meeting up and District Manager Gerry Esposito reads the roll. Chairman Chris
"On the public session we have one item," said Chairman Chris before handing it over to Susan. Time of possession tonight will be very important.
6:36 PM: Susan Pollock kicks off the presentation.
"It's very difficult for a project like this to satisfy everyone completely. I hope we've worked that balance. I use that word balance intentionally. In developing a project like this, it's all about the balance. We think that what we're offering to the community, improving quality of life and open space require the kind of project that we're going to propose... Our mission is to develop, create, preserve and renovate housing in New York... Affordable housing is first and foremost in our agenda. We need people who live and work in the community."

6:50 PM: Susan hands it over to the architect whose name is John Malcovich who says he hopes strongly that the building will be a model for sustainable development and also that This portal is mine and must be sealed up forever. For the love of God!

Susan takes control again, speaking about the refinery equipment inside the building. They will have to take out all that equipment and that's expensive.
"We are happy to be doing it, because it will turn out to be a centerpiece of a project but you can't overestimate the expense of tackling this building. We do think it will look fabulous when we're done."

6:57 PM: It's the open space plan and they've got a diorama to explain where the 5 acres of 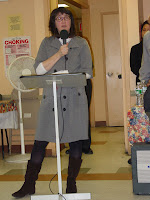 7:05 PM: Now we're into a discussion about the zoning. The New Domino plan wants to change the area's M3 to an R6 and R8 zone. There's a zoning map change and a zoning text change in the works. Finally, we reach the Draft Environmental Impact Statement and the environmental impacts that the development will have on the site.

7:16 PM: Susan cuts the discussion and reveals that they have created an animation of the New Domino Sugar site. Let's enjoy!