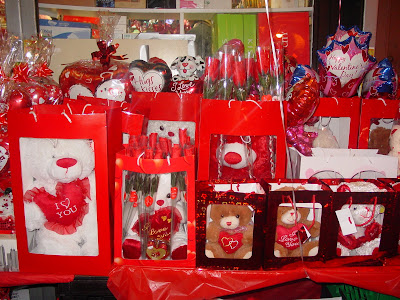 "Help us! We're trapped from your love!"
With every store blinged out in lovin' spoonfuls of valentines sweetness, let's take a look back at the weekend that was in Williamsburg.
Saturday: 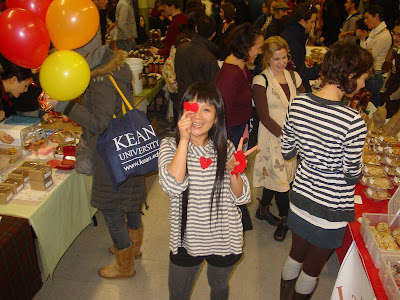 The Greenpoint Food Market was slammed on Saturday afternoon, with vendors unloading their 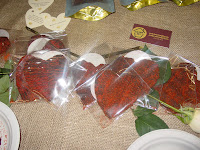 homemade deliciacies which included chocolate truffels, toffee, apple pies, jams and jellies, cookies of all stripes, kombacha and even turkey jerky carved into the shape of a heart. I asked what part of the animal the jerky was made from, and while they didn't dry out and smoke animal heart muscles, apparently you can probably do that. They actually had several different kinds of jerkies and are apparently working on a vegetarian one, made from seitan or tofu. Good luck with that.
On the other end of Greenpoint, the title for Brooklyn's best wings were up for grabs at Red Star Bar, and the winner is Super Wings in Crown Heights. Wheeler's in Sheepshead Bay was the office favorite but they may have left after an hour or two in typical Sheepshead style. They didn't win. I don't have video of the event, so here's something from Man vs. Food with a shout out to producer Emily Newman. Pass the hot sauce.

Later on, it was the Stuff Hipsters Hate book release party, because they got a f***ing book deal. They, being the persons of Andi Bartz and Brenna Ehrlich. Whether the women themselves are hipsters is an open question, but what wasn't was that this was a party with some serious making out going on. With the thrashing, foundation drilling sounds of On Point followed by thethe awkwardly melodic yet lyrical floodgates of Jeffrey Lewis' acoustic set, it was a full-on dental convention in Glassland's upper deck. I caught one couple on the couch. 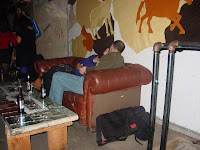 Let's just move in for a closer look... oh crap! They spotted me. 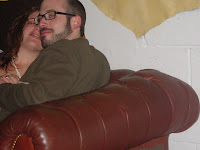 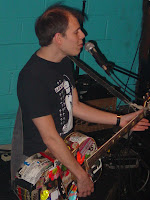 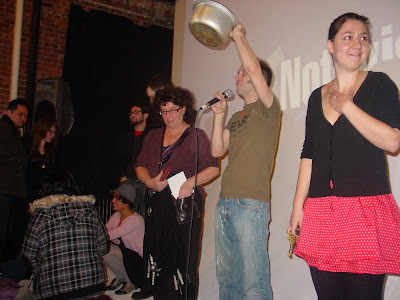 Moviehouse celebrated its 3rd anniversary at 3rd Ward, and good things come in threes. Like 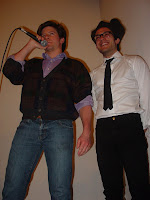 celebrity death. In fact, that was one of the themes for this year's 3-minute 3rd anniversary film festival. Filmmakers had to include references to the three monkeys, celebrity death and something uncontrolable, such as the fundraising climate for start-up not-for profits that still have to file taxes this year (above).
Among the contestants, were the severely peculiar crew of CK Swett, Victor Jeffreys II and Russel Fong which brought a bunch of laminated Michael Jackson masks to a house party in the suburbs and filmed the goings on. Then it got weird. How weird? See below.

Under A Weary Life from russel fong on Vimeo.