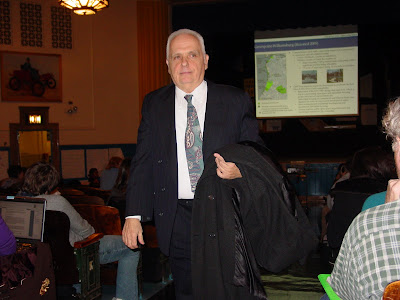 Joe Lentol isn't going to take this sitting down
Add Assemblymember Joe Lentol to the list of people ticked off at the MTA for suspending G-Train service this winter and again later this spring. Lentol's press warrior Amy Cleary fired off a scathing release this morning addressing Greenpoint's concerns...

In a letter to the Metropolitan Transit Authority that is following up on telephone discussions with the Transit Authority, Assemblyman Lentol has offered to work with the MTA on issues that have created significant frustration for commuters who use the alternate shuttle bus service when G train service is suspended. In his letter, Assemblyman Lentol takes note of commuter concerns, such as the lack of advanced notice of service suspension, lack of a shuttle bus schedule, and bus drivers who are not familiar with the shuttle bus route.
“These are issues that can be fixed in a timely manner so that commuters will not have to deal with such frustration in the future, and we want to work with the MTA to make that happen,” says Lentol in the letter. Lentol notes that one issue that he was especially upset about hopefully will not reoccur, that is the fact that the first round of closings occurred in the middle of winter.
“Community outreach is important here. People do not want to be left out in the dark. Providing the commuters with a reasonable explanation with why service has been suspended is significant” says Lentol. In his letter to the MTA, he states that “by taking into consideration the concerns of current alternate shuttle bus service issues and applying the necessary fixes to future alternate shuttle bus services, we can increase commuter confidence and decrease commuter frustration.”
Posted by Aaron Short at 12:58 PM