The State of the Borough, make that the Park Slope Armory was the place to be last week. 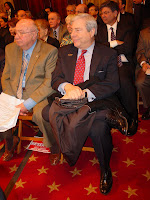 Everyone is weighing in on the Beep's speech, which touched on the renovation of Loew's Kings (Helen Klein The Courier), the future of Fourth Avenue, turning more armories into rec centers, the new poet laureate, and Atlantic Yards, briefly.

WG News and Arts has a new issue out, and while they don't have Reid Pillifant anymore, they've got two interesting pieces by Lisette Johnson about Duane Reade moving in on Kings Pharmacy's turf, Shannon Manning on the vitality of North 3rd Street, and a post by Anne Szustek about gilttery fashion along the G.

On the topic of locavores, NBC New York visits Delmonicos, the Brooklyn paper dines at Anella's in Greenpoint, while I speak with Ben Sargent whose Chowdahouse is blowing up. Really (the daily news has it too). Just watch out for the DEC. 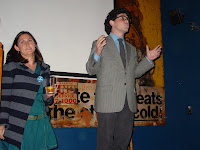 A tree sweater in South Slope has gone missing. Someone call the 78th Precinct!