Hangover Monday Links: There's a Tiger in the Bathroom!

As A Short Story digs out from the remains of an eventful bachelors party weekend, I discovered a few things about my friends and myself that I didn't know before. Like an aversion to tigers for instance, including cuddly tiger mascots marching in Chinese New Years parades. Also Tiger Woods, whose stilting Friday morning apology was uncomfortable both for its lack of human emotion and public display of private disarray. Can we 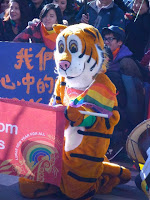 have a do-over of the speech?
*Speaking of famous tigers, is it just me or did Tigger come out in Chinatown this weekend?
*Continuing on the animal front, the raccoons are spreading! First there was one in Boerum Hill. Now, according to New York Shitty, there's one in Greenpoint. Critterwatch is in full effect.
*While I was merely joking about going to Williamsburg to kick-start my own generational line with a quickie Hasidic wedding, it turns out someone already beat me to it seventy-five years ago.
*Among the other things missed this weekend, NBA-star Shaquille O'Neil is now a gallery curator and five-tool curator Karen Bookatz is involved in this somehow. Classic Karen. 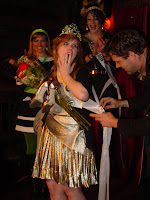 *In Greenpoint, The Bridge to Somewhere has narrowed down its designs to four and they will compete American Idol style open house at St. Cecilia's Church on Wednesday, February 24. Meanwhile, the G-train was still shut down this weekend and again in about two months. Miss G Train is not happy that her title will be changed to Miss G Shuttle.
*Two weeks ago, I profiled a New Kings Democrats meeting with four judicial experts (two attorneys two political wonks) regarding courts in Brooklyn. An error was corrected in an earlier version but somehow stuck in other versions online. To be clear, Civil Court judges are elected county-wide and you have to petition to get on the ballot. This includes a judicial screening committee that was introduced in 2003 following several bribery convictions involving Brooklyn judges. State Supreme Court judges are nomined through judicial convention, which is attended by judicial delegates, of which Chris Ownes was a member. One of the panelists' spouses, Margarita Lopez Torres challenged this process in the Supreme Court in January 2008 and lost.
I should also note that this was not a Vito Lopez-friendly crowd in case you didn't pick that up reading it. Two of the speakers ran (well, Matt Chachere's spouse ran) aggressive campaigns against a Lopez-endorsed candidate in civil court judicial races. Would the forum have been more interesting if there was a guest, such as Pam Fisher, Richard Velasquez, or Jack Battaglia, to argue with the panelists about the judicial system? And why weren't they invited? Interesting to ponder over. 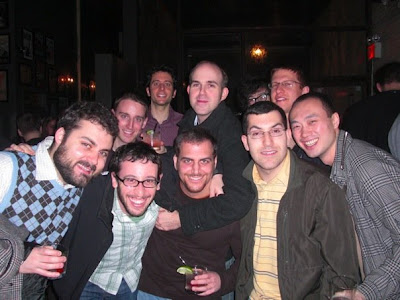 Thanks for the memories guys. And watch out for tigers.
Posted by Aaron Short at 12:53 PM